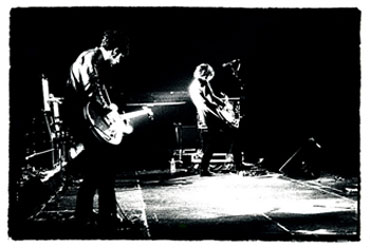 First of all, as a photographer, why did you choose music and espescially rock ?

I decided to photograph what I'm passionate about and what inspires me - and that's music.  When I look at which bands I want to shoot and work with, I choose bands I love - the darker and sexier the better.

What are in you opinion the qualities to be a good rock photographer ?
You've got to really know how to use a camera, be able to do everything with your eyes shut and faster than anyone else.  Also you've got to be passionate about rock 'n' roll and not care too much about breaking all the rules.

Is it tricky to be a rock photographer ? Like touring with a band ?
It's harder now than it was when I started out 10 years ago, there's much more competition, but then again - that can only be a good thing.  It's hard being a female rock photographer at times, I've had to fight twice as hard to be taken seriously in a male dominated industry.  Also, tour buses really aren't built for women!

You followed Black Rebel Motorcycle Club for 5 years. How did you meet them ?
I met BRMC in 2002 on their first UK tour, I'd shown them my work and they loved it and invited me on tour there and then!

Can you explain what is the nature of your relations with a band like B.R.M.C ?
I worked with Black Rebel Motorcycle as their official photographer for 5 years - I travelled the World with them as tour photographer, shooting everything from relaxed personal shots, candid tour-bus antics, intimate backstage emotions and live shots at gigs and festivals Worldwide.  We became really close friends as well as keeping a professional relationship.  Many of the photos were used as single covers and album artwork, such as the single cover for 'Whatever Happened To My Rock n Roll', single cover for 'Weight Of The World' and album photography on the albums 'Take Them On, On Your Own' and 'HOWL'.
I was also the Director of Photography for the music video 'Weight Of The World' by Black Rebel Motorcycle Club.

While you are touring, do you try to make yourself unnoticed or do you feel as a member of the band ?
Whilst shooting I always try not to make myself noticed, especially when shooting live - I try to blend into the stage and keep out of the way as much as possible.  Being on tour though as a photographer is like being part of the band - I'm living, eating, sleeping, working to the same schedule as the band, and I also start to smell like the band after a week on a tour bus!

Where is the line you do not cross while you are with a band ?
Hard to say as I've probably crossed all of them!

Finally, what about your future ? Do you have some exhibtions planned ? Will you tour with another band ?
I'm currently extending my t-shirt range 'By Ami Barwell' - it's combining my classic rock ‘n’ roll images with fashion; hoping to build on the success of last years Ben Sherman range.
I'm looking to go on tour this summer - so if any bands are interested, get in touch...