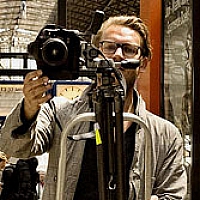 Every photo is an edit of several photo’s he took at exactly the same spot in a period of two weeks. He then Photoshopped the images he captured to create the Babel Tales series.

The pictures are all pretty cool.  As a former New Yorker, i think these do a great job of catching the energy of the sidewalk.  People doing their own thing and creating a dynamic piece of art every second of the day.