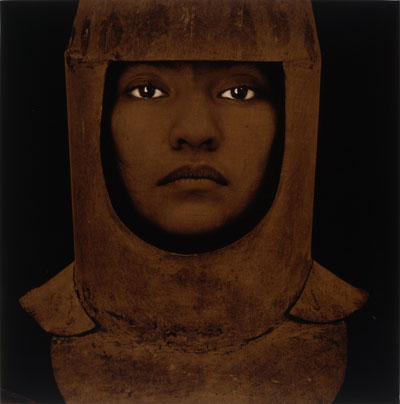 Featuring images from the collections of the MEP, this exhibition offers a kaleidoscope of fifteen photographers and video artists from Latin America.

Leo Matiz (1917-1998, Colombia) photographed people and urban landscapes for over forty years in the tradition of the Mexican school personified by masters such as Manuel Alvarez Bravo. The photography of Graciela Iturbide (1942, Mexico) explores the relationship between Man and Nature. Here, she depicts, birds in states of disarray. Jorge Damonte (1943, Argentina) photographs Argentinian celebrities from the world of politics, fashion and entertainment in the 1970s. In The Other Americas, Sebastião Salgado (1944, Brazil), from work of the same era, focuses on the destitute of the Latin American continent.


La Manzana de Adàn (Adam’s Apple) by Paz Errazuriz expresses friendship, hope for social recognition and the carefree insolence of actors living off the sex trade. Red and Blue with Horse by Miguel Rio Branco (1946, Brazil) is a poetic construction in mineral rather than botanical hues. Juan Travnik (1950, Argentina) photographs the solitude and nostalgia of the 1990s in a vanishing Buenos Aires.

Luis González Palma (1957, Guatemala) is moved by the lot of the indigenous Maya and their “mestizos” (mix of European and Amerindian races). These portraits play on the white of the eyes – or its absence - to capture the soul of a people. For Marta María Pérez Bravo (1959, Cuba) who places herself in the picture, the body is the synthesis of an experience, midway between myth and reality. The photographs of Roberto Huarcaya (1959) Peru) are the result of projections of famous portraits by great painters of the Renaissance (Leonardo da Vinci, Caravaggio, Cranach) onto figures and landscapes of his country. Alexander Apóstol (1959, Venezuela) photographs dangerous adolescents in their suburbs. The series, Them as a Fountain, uses, in a completely different context, a method inspired directly by Bruce Nauman.

The video piece, la Bandeja de Bolivar/ Bolivar’s Platter, by Juan Manuel Echavarria (1947, Colombia) symbolizes, through the smashing of a platter, the civil violence and conflicts that have rocked Colombia for decades. In Motel Hotel, Marcos Bonisson (1958, Brazil) plays on the semblance of a long journey through day and night, whereas Katia Maciel (1963, Brazil), in her Inutil paisagem (Useless Landscape), reveals and conceals the walls which isolate tiny green urban areas. Thiago Rocha Pitta (1980, Brazil) in his Homage to William Turner, using Turner’s work, Burial at Sea, to show a boat in flames on the dirty water in the bay of Guanabara.