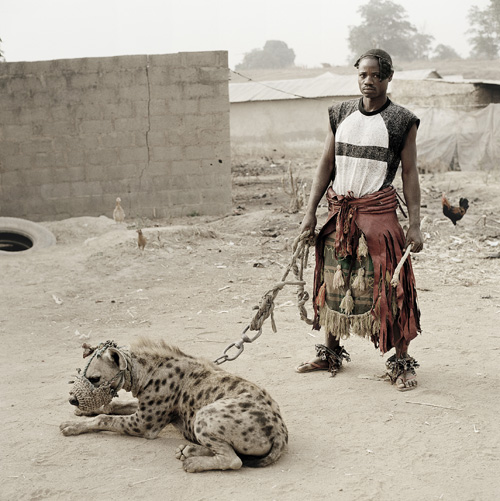 ... about Africa, presented by two African photographers of the post-Apartheid generation and a Dutch-Canadian photographer, seeking to give visibility to the inhabitants and to the complexity and nuances of African culture; such is the topic of the present exhibition. These young authors do not wish to exercise judgement upon the situations unfolding before their camera lenses, but instead, by revealing marginal events, to convey a sense of the values, conditions, objects and incidents of everyday life, while keeping a political eye on the changing world around them.

Wishing to keep their distance from traditional photojournalism, setting little store by the rules of the mass media and refusing to apply the clichés with which the image of Africa has been imbued since the colonial period and the era of Apartheid, they are inspired of the photographic approach of artists like David Goldblatt, Roger Ballen and Guy Tillim.

Rather than scouring the continent camera in hand, seizing the moment, as it were, they forge personal relationships with their models, working over long periods of time, focusing on calm and "secondary" situations, switching between documentary and artistic photography while having recourse to portrait and a degree of mise en scène.


Pieter Hugo - The Hyena and Other Men

The Hyena and Other Men is the story of men, who in the company of hyenas, pythons and baboons, earn their living doing street performances for the crowd and selling traditional medicine. Captivated by a picture he came across in a South-African newspaper depicting men with their hyenas in the streets of Lagos, Nigeria, Pieter Hugo decided to go and meet them. A few weeks later, accompanied by a local reporter, they hooked up with them in shanty town on the outskirts of Abuja, to take the road with this troupe and to get to know their fascinating world a little better. Bit by bit, he got to meet the animal merchants, with their traditional rites and strove to photograph their daily round. He quickly realized that what really interested him in this subject was the hybrid crossover of the urban and the wild and the paradoxical, often very affectionate, at other times cruel and brutal, relationship that the merchants have with their animals. Via a series of extraordinary portraits of this marginal existence taken over the space of two years (2005 to 2007), we discover a world characterized by complex relationships and interdependencies, a world which wavers between traditions, myths and modernity, domination and submission.

Beaufort West is a small town in the middle of the desert, intersected by the national N1 highway, lying halfway between Cape Town and Johannesburg, and crossed every year by millions of cars. Here, as in most South African rural towns, agricultural activity has fallen off considerably from one generation to the next, causing an exodus to the big cities. Beaufort West is a desolate place. Unemployment is rife and it has a very high crime rate. Those who remain, or who return here, have been rejected everywhere else. Yet as one leaves the town centre one happens upon an amazing sight: a prison, standing in the middle of a roundabout.
Mikhael Subotzky, having already carried out several photographic projects in South African prisons, decided to spend time in Beaufort West to sketch a portrait of the town. Between 2006 and 2008, he would return there regularly, to live with the people, going out to meet them in the company of Major, a very popular guy about town. He took a particular interest in problems of marginalization, incarceration and disillusion to create an inventory of the social reality of South Africa in the post-Apartheid world.

In 2007, Paolo Woods set out to recount the adventure of the conquest of the African continent by the Chinese. In search of coveted raw materials - copper, uranium and timber - Beijing has sent forth its adventurous companies and entrepreneurs.
500.000 Chinese emigrants to Africa are striving to make their fortune, in a continent which the West deemed worthy of receiving only humanitarian aide. Some are managing large conglomerates, while others are selling bargain items along the roadsides of some of the world's poorest countries. Accompanied by the journalist Serge Michel, Paolo Woods criss-crossed the entire continent to encounter these two very different worlds, from the threatened forests of the Congo to the karaoke bars of Nigeria, along the pipelines of Sudan and the railroads of Angola, from the top ministries in the capitals to the devastated countryside.
Chinafrica also tells us of a bygone era. The Chinese have little in common with the former colonisers - they build roads, hospitals and schools. For the Africans, it's a new phenomenon which makes no claims of democracy or transparency, a law beyond dictatorial regimes. The images in Chinafrica are a rare and surprising portrait of an unsuspected here and now, as well as a condensed portrait of a globalized world.