HomeFrontLine: Reflections on Ten Years of War Since 9/11, at SilverEye Center for Photography 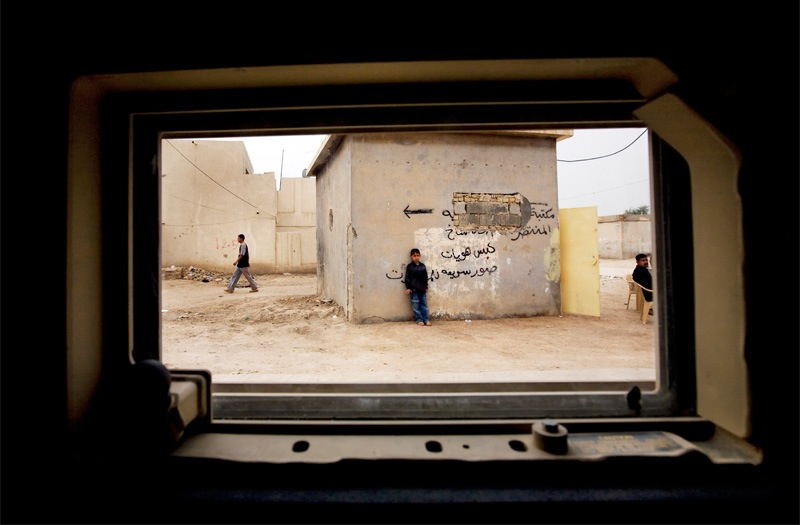 The Silver Eye Center for Photography announces the opening of HomeFrontLine: Reflections on Ten Years of War Since 9/11, running from September 13 through December 10, 2011. This exhibition explores the far-reaching impact of the wars in Iraq and Afghanistan -- both on and away from the combat zones -- through the words and images of eleven leading documentary photographers and photojournalists.

HomeFrontLine is a space in which to pause and to think about this decade of war in the aftermath of 9/11 and the enormous human, social, economic and political costs incurred. It pays tribute to the selflessness and courage of soldiers and their families, and honors those in and out of uniform who have sacrificed so much -- both on the front lines and on the home fronts. The exhibition also considers how photography and visual imagery shape our understanding and perception of the often contradictory experiences of war, where the lines are continuously blurred between safety and danger, between soldier and civilian, and between truth and rhetoric.

The photographers represented here are multinational and multigenerational; some came of age with the young soldiers they were photographing; others have careers spanning over many decades. What unites all of them, however, is the need to share something recognizable and deeply felt about the nature of these particular wars (and by extension, all human conflict) and their effects. The photographers' voices and concerns are clearly present in each of their photographs or multimedia essays, as are the first-hand accounts of many of their subjects -- active duty soldiers, veterans, war-strained families, refugees, ex-detainees, Americans, Iraqis, and Afghans.

Collectively, these images speak not only to the often stark realities of war and how it is fought, lived and remembered, but also to other interrelated themes and issues. Among them: the relationship between homeland security, civil liberties, and human rights; the construction of national identity and patriotism; freedom of the press; immigration policy; the plight of refugees; the surmounting problems faced by veterans; and the meanings and ideals of democracy and freedom.

As we mark the anniversaries of September 11 and the start of the war in Afghanistan, we are mindful of philosopher George Santayana's best known quote, that «Those who cannot remember the past are condemned to fulfill it.» HomeFrontLine bears witness to those caught in history's unpredictable path and asserts the need and commitment to make sense of the chaos of war and to recognize both the pain-and sometimes the hope-that has followed.

Silver Eye Center for Photography is a nationally-recognized, non-collecting institution exclusively dedicated to contemporary photography. Founded in 1985, Silver Eye has been at the forefront of celebrating photography, both as an expressive art form and as a medium that brings to light the telling details and larger stories that influence and inform our understanding of ourselves and the world. With our singular commitment to exhibiting and promoting contemporary photography and photo-based multimedia, we are unique in Pittsburgh and the region.

Vignette : Benjamin Lowy, Untitled, from the series Iraq|Perspectives I, 2003-2008. Courtesy of the artist.