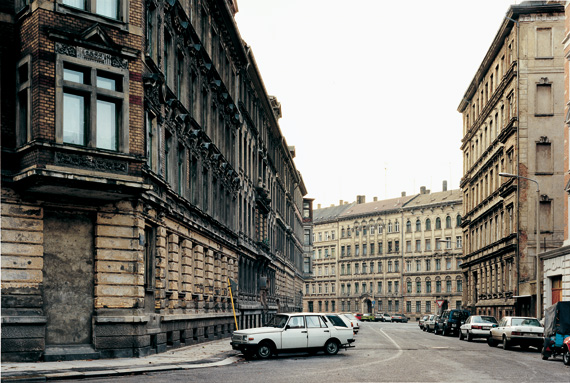 The sixth exhibition in the scope of the Carte Blanche project of the GfZK presents the current expansion of the photographic collection of VNG - Verbundnetz Gas AG and a cross-section of its collection of paintings and graphic art.

The photo collection of Verbundnetz Gas AG is one of the most significant collections of contemporary photographic art in Germany. It is a reflection of a period of social transition, documenting the radical political, economic and social changes that took place in the former GDR between 1992 and 2000. This detailed insight into the recent history of Germany has a focus upon landscape and industry, based largely upon a comparative view of the periods before and after 1989. However, key historic events of autumn 1989 have remained outside of the spotlight thus far. Viewed from different biographical perspectives, these now form the focus of the newly acquired photographic works. Subjective viewpoints and documentary aspects are equally characteristic for the collection extension.

The key principle here is that of "simultaneousness". This is evident, for example, in a comparison of the contributions of Gerhard Gäbler and Ursula Edelmann or Peter Oehlmann and Matthias Hoch: on 02 September 1989 the new (and final) school year was celebrated in socialist Altenburg (Gerhard Gäbler), whereas in Frankfurt am Main the Museumsuferfest illustrated a manifestation of glamorous "western" life (Ursula Edelmann). On 11 October a man glances at his wristwatch in the timeless backdrop of Stonehenge in England (Peter Oehlmann), whereas in Leipzig the Monday demonstrations are set to change the course of history irrevocably (Matthias Hoch). This "parallelism" of events, which also takes account of highly personal, even intimate experiences, enables a broader perspective of the historical events of 1989 than that permitted by a tighter focus. The group of over 70 artists belong to different generations and photographic schools, as well as embodying key positions of the international art scene.

The painting and graphic art collection of the VNG comprises over 200 works, primarily by young east German artists, the majority of whom are students or graduates of the Academy of Visual Arts in Leipzig. It forms a representative cross-section of artistic signatures from our recent past and present. At the same time, the collection also represents a documentation of significant themes and motifs from the period 1990 to 2008. A large part of the collection comprises works on paper. What was originally determined by budgetary restrictions has now proved to be a stroke of good fortune, because new and experimental work in particular often finds its first application on paper. In the majority of cases a small group of works was acquired from each artist, as well as a number of series. This enables the artistic positions to be illustrated more effectively and working processes rendered more visible. In the meantime, the majority of the artists with works in the painting and graphic art collection have now achieved international recognition.

The VNG was one of the first companies in the new federal states to initiate a collection, in 1992. The artistic commitment of the VNG is part of a greater social involvement that also includes activities in the fields of culture, sport and social affairs, such as the Verbundnetz der Wärme project, which promotes voluntary work, or Verbundnetz für Demokratie und Toleranz, which works to counteract extremist tendencies in society. In addition, support is also given to young sportsmen and women, as well as universities and their academic and scientific collaborations.