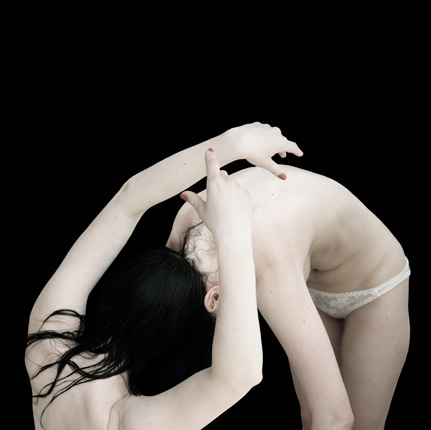 Gallery f 5,6 is pleased to show the latest works from the series Violet Vertigo by Swedish shooting star Julia Peirone. Julia Peirone received the prestigious Swedish state funded London residency IASPIS in 2008, where the photographic based series, a sculptural project and a video piece was created. Violet Vertigo is her second exhibition at the gallery.

Central to Julia Peirone work is the concept of artistic process and its possibility of making this visual for the viewer. Her images are created in a kind of cross-fertilisation or seeming duality between the documentary and the staged, the analogue process of photographing, mixed with a digital process of altering, cutting, adding and collaging together and the process of editing and reducing this to an essence and content. The underlying question in Julia Peirone's new work very much centers around the questioning of duality of the individual: what is ones appearance or outer world and role in society and what is ones inner, private emotional world? And how do they correlate? This dichotomy is something all humans, of all cultures have undoubtedly experienced, perhaps at its most potent and awkward moment, when entering into puberty. As Julia Peirone's work since the beginning has always been in close proximity to her personal experience and view of the world, Violet Vertigo centers around aspects of the female body at exactly this awkward new stage. This kind of questioning in an art historical context roots perhaps most pointedly in the surrealist ideas of the female body and its sexualit in the works of Boiffard, Man Ray, Breton or Hannah Höch and has continued to be looked at by artists like Mona Hatoum, Helen Chadwick, Cindy Sherman, Tracy Emin or Nan Goldin in more recent times.

Blackberry Bloom, Baby, Sugar, Cherry Burst , Pumpkin, Muffin, or Violet Vertigo are the titles of Peirone's portraits. What sounds like the male nick names for girlfriends from a soap opera, in fact are real brand names of make - up products. These titles and cosmetic brand names sound promising and seductive to the consumer. But it is hardly the glossy adverts of beautiful retouched models that awaits the viewer in Peirone's work. One rather is confronted with slightly disturbing and strange portraits of young women. In some portraits two or seemingly more female slender, naked, pale bodies kind of morph into each other, in frozen, dance - like poses, wet long strands of hair covering body parts and the face. Here Peirone makes particular use of the digital process. In fact it is one body, doubled or mirrored digitally to create the illusion, which becomes apparent only on second glance.

In other parts of the series Julia Peirone simply photographed her friends' hair bands they have took out of their hair. On closer inspection single loose strands of hair are trapped in the rubber bands. The viewer is left with the feeling of hair functioning once more in a dualistic fashion: on one hand as a signifier of beauty and the essence of the feminine and on the other disembodied ripped out single hair strands producing a feeling of almost disgust. It is not only the duality that Peirone, time and time again addresses on different levels but it is very much an emotion a feeling in a sense that which the title (Violet Vertigo) of the show already encompasses: a feeling of vertigo, if one has ever experienced it, is an almost undescribable feeling and experience. Peirone's work seeks to address exactly that basic non-descript essence of feeling. It is this essence that words have difficulty to reach and where a music piece or a painting or maybe a poem take over. It is this realm that photography, the supposed document of reality does not often inhabit. But Julia Peirone interstingly seeks to enter this realm exactly with the photographic process.

It is once more about unvovering, layer for layer, that which makes us all human, across cultures and social conditioning to the basic knowledge of being human and seeing more than just with our eyes or our ears but with all senses combined.

Julia Peirone (1973) moved to Sweden from Argentina when she was three. She studied in Gothenburg and at the well-known Kunstfack in Stockholm. She belongs to the younger generation of leading Swedish artists working mainly in the photographic and new media realm. She has received numerous Scandinavian artists' grants, prizes and public commissions and has been exhibiting continuously in museums, institutions and galleries such as the National Portrait Gallery, London, Kunstverein Munich, or the Finnish Museum of Photography to name a few.