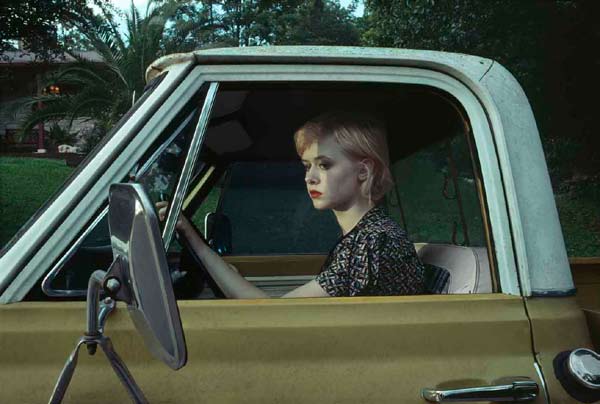 BrancoliniGrimaldi gallery is pleased to announce - Austin, Texas - an exhibition of 25 color photographs by Lise Sarfati from 8th May to 14th June 2009.
The opening will take place at the gallery on 8th May, at 6:00 pm, Via dei Tre Orologi 6/A, Roma.
LISE SARFATI - Austin,Texas-
This new series of Lise Sarfati was completed in 2008, as part of her trilogy on the United States which started with the series The New Life, published by Twin Palms in 2005 and continued with the series Immaculate and She, which will be published this year by Steidl Mack and as a portfolio in Aperture magazine. The series Austin, Texas was published in October 2008 by Magnum Publisher under the title Lise Sarfati, Fashion Magazine.
THE FICTIONAL DOCUMENT
In her work, Lise Sarfati never makes a distinction between documentary and fiction. The choice of the city of Austin, Texas is not trivial: Austin is both the geographic center of the United States and the epicenter of the underground rock scene.
Austin, Texas presents teenage characters operating in a familiar environment:
that of Austin, with its wooden houses, its interiors, its streets and its muted colors.
THE SPACE AND THE BODY
Lise Sarfati focuses on the theme of the relationship between the body and space. It is this permanent interaction of the characters with space that structures her approach. She does not refer to her work as portraits, but as “studies” of figures.
Quentin Bajac, Head of the Photography Department at the Museum of Modern Art, Centre Georges Pompidou, describes this phenomenon quite well: “All these girls are located in the here and now of the picture and an indefinable elsewhere. This fundamental ubiquity is, to my mind, the reason for Sarfati’s interest in young models.[…] Each of these photos literally records the distance between a body and the space that surrounds it, and in that way, metaphorically (and this time very consciously) constructs a relationship between the model and the world around her.” (1)
NARRATIVE FASHION
Naïve and brutal, straight out of a novel, with a powerful sensuality, reclined on the armchair in the family room or roaming the streets of a possible Texan Eden, these young women have no purpose, no cause to fight, no clear action to explain their restless wandering. “The clothing always seems to have been chosen to match the model, and the logic is one of verisimilitude (suite)

– each young woman projects a character she has chosen, but remains completely in harmony with her own natural context and setting. In accord with Sarfati’s photographic maieutics, they’re full participants in the final photo’s mise en scène.[…] Thus the change induced by the closing has nothing in common with metamorphosis. It is even imperceptible sometimes. In any case, the clothing never seems to be a disguise under which the model disappears. (Quentin Bajac “Life Stills”)(2) PERPETUAL ADOLESCENCE
From her readings, Lise Sarfati keeps deeply rooted in her approach the literary concept of permanent immaturity, put forth by writer Witold Gombrowicz. From his masterpiece, Ferdydurke, states “youth was not for her a transitional period: for a modern person, it was the only period that was real in all of existence.” an idea Sarfati’s work continuously references.
Quentin Bajac again eloquently explains this fundamental contribution to this photograph’s approach to her work: “She likes to cite Gombrowicz and his fondness for the concept of immaturity – a secret revolt, a silent refusal, a game played with life and reality, and especially the idea of a subject both malleable and yet elusive, who always, in the end, slips away.” (3) Lise Sarfati herself explains it to Rick Owens in another interview on Fashion Magazine: “What interests me about American teenagers isn’t the social dimension. It’s adolescence from a more general view, as a metaphor, a transition, a mirror. »
DAILY ROMANCES
This undeniable contribution of “literary work” forged Sarfati’s perception and photographic practice, giving her marked taste for storytelling. Lise Sarfati is interested in the anti-heroic stories of teenagers from provincial cities in the USA.
Each series is a transverse story; each evokes a new one that plunges us into a literary imagination.
For her, photographic aesthetics is not built by the eye – that of the photographer - but by an accumulation of experiences and sensations that generate a complex world, a unique history.
Paris, 5th January 2009
Lise Sarfati’s work is included in public collections including the San Francisco Museum of Modern Art, Los Angeles County Museum of Art, Brooklyn Museum of Art, the Philadelphia Museum of Art, and the Biblioteque Nationale de France in Paris. Her work has been featured in solo exhibitions at FOAM Amsterdam; the Domus Artium, Salamanca, Spain; Maison Européenne de la Photographie, Paris, France; and the Nicolaj Center of Contemporary Art, Copenhagen, Denmark. In 1996, the artist was awarded the Prix Niepce in Paris and the Infinity Award from the International Center of Photography (ICP) in New York.
(1)(2)(3) Quentin Bajac, “Life Stills” from Lise Sarfati Fashion Magazine Austin,Texas, october 2008, Magnum Publisher