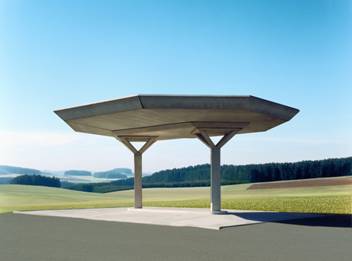 The works begin as traditional, analogue photographs of halls, factories and storage facilities taken with a large-format camera.  Images of common, mass-produced, industrial structures are then stripped of any individualizing elements through digital manipulation.  Void of logos, signs of aging or wear, and practical architectural elements such as doors and windows, these modern, utilitarian buildings become idealized versions of their original design concepts, without context or scale.

By removing any indication of function or use, the structures are reduced to relationships between color, shape and form.  The artist produces a two-dimensional “sculpture” of the original structure through the photographic and digital editing processes.  The final photographs are not presented as objective views of reality; instead, the images are revealed as carefully composed constructions.

Josef Schulz was born in Bischofsburg, Poland in 1966 and has exhibited widely throughout Europe.  Mr. Schulz studied at the Düsseldorf Art Academy under Bernd Becher and Thomas Ruff.  He has received the European Architectural Photography Prize, the Kodak and Large Format Inkjet Award, the db architekturbild of the European Architectural Photography Prize, and the Prix Voies Off at the Rencontres d'Arles Festival.  His work is held in public collections, including the Museum for Contemporary Art | ZKM, Karlsruhe, Germany and the Aarhus Art Museum, Aarhus, Denmark.  Josef Schulz lives and works in Düsseldorf, Germany.