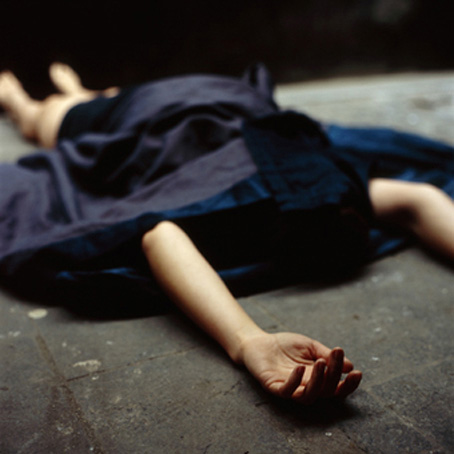 In the creation of her 'scenes', Kumi Oguro uses her female models as if they were dolls and places them in a space that is indeterminate; an opaque context. Everything seems to be under the control of the artist, and yet there is the sense of a certain degree of intuitive decision or involuntary action at work in the staging.
The faces or identities of the models are mostly not shown. Their poses are uncomfortable, or at least unnatural. That, together with a particular way of framing that evokes a space outside the image and the strong contrast of light and darkness, creates an underlying and elemental tension.
Oguro supplies no certain story to the viewer. Instead, what is experienced is more like a dream, which we are often unable to explain, as there is no logic in it.

Her images make us think of the instant 'before' or 'after' what is actually visible. Some appear to be almost 'timeless', as if a certain situation was always so and will remain so, unchanged. This dimension of time, in combination with her handling and arrangement of space, adds a film-like impression to her works.
Faced with her photographs, the uneasiness or confusion that we may feel is caused by the coexistence of contrasting elements: the dangerous and the peaceful, the eerie and the laughable, the tragic and the playful.