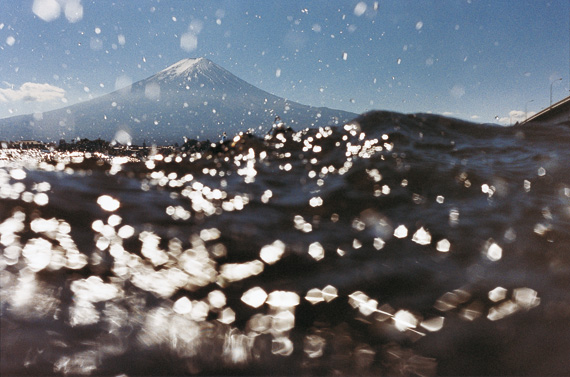 We are pleased to present the series "half awake and half asleep in the water" by the Japanese artist Asako Narahashi in her first one-person exhibition in Europe.

The series of this Tokyo-born artist (1959) was made since the year 2000 on the coasts of Japan, and shows in unusual landscape photographs a new view of this country. Standing half in water, or swimming, Asako Narahashi photographed modern civilization as well as the characteristic symbols of Japan, such as Fuji Mountain, in connection with water. The exhibition shows a selection of color photographs from the series as well as to date still unpublished black-and-white photographs.

An unexpected connection between water and land arises from the position of the photographer. With the changing sea in the foreground, each picture illustrates a new perspective of the coastal landscape. The title of the series points to an ambivalence of feeling illustrated by the images. The photographs describe a state somewhere between the pleasant feeling of floating in the water and the simultaneous danger of succumbing to its tremendous force.

"The images are convincing not only because of the unusual point of view, but also through an unusual ambivalence and poetry. Fascination and fear, liquidity and hardness -- the water which continuously surrounds us remains in Narahashi's photography somewhat mysterious and, finally, inexplicable. On the other hand, the land visible in the distance signalizes familiar safety." (Anna Gripp, in Photonews, 2/08)
The work of the artist became internationally known last year through the monograph "half awake and half asleep in the water," published by Martin Parr. Work from the series was in previous years shown in group exhibitions here and abroad, among other venues this Spring in "Heavy Light. Recent Photography and Video from Japan", ICP, New York; "Japan Caught by Camera: Works from the Photographic Art in Japan", Shanghai Art Museum, Shanghai; "Japan Contemporary Ceramics and Photography", Deichtorhallen, Hamburg; "Black Out, Contemprary Japanese Photography", Tokyo, Paris, Rome