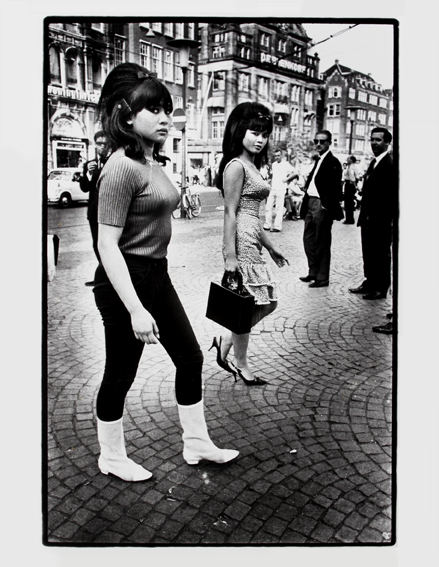 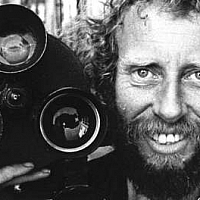 „ Ed was a great believer in the power of the individual..One of the reasons why he flourished in Amsterdam, was that so many strong characters lived there: He made it his job to locate and photograph them... .. Above all you can sense his energy and determination to document the city he loved do much...“
(Martin Parr, Ed van der Elsken , My Amsterdam)

Galerie f5;6 is proud to present one of the most famous and internationally renowned Dutch photographers and filmmakers: Ed van der Elsken (1925 Amsterdam - 1990). Ed van der Elsken already became well known in the 1950’s, with exhibitions in the Moma, New York, The Art Institute, Chicago, the Walker Art Centre, Minneapolis, the Stedelijk Museum, Amsterdam, or the Bibliotèque Nationale, Paris. In 2000 the Kunstmuseum, Wolfsburg held the first major retrospective in Germany.   The show is a selection of vintage photographs of Amsterdam from the late 1940’s to the mid 1980’s and his colour photographs, rarely published and seen, recently selected as a portfolio by Martin Parr. Furthermore, the gallery will feature Ed van der Elsken’s A Photographer films Amsterdam.   Amsterdam, as his hometown, was always central to Ed van der Elsken’s body of work. It is nearly impossible to characterise Ed van der Elsken’s work in a few lines. Above all his work was direct, intense, analysing the state of the individual in its own specific moment and its surroundings. In many ways Ed van der Elsken’s work as a photographer and filmmaker should be seen in the context of the philosophy and spirit of the 1950’s, centered around the so- called subjectivism in photography, like that of Robert Frank or William Klein, and Nouvelle vague in cinema.
Throughout his life Ed van der Elsken had a preference towards the street as his subject in film and photography. He would spend days wandering the busy quarters of big cities .  He would choose those strong individuals, who in one way or another reflected his own mood, interests or personality. The background of the public space was an important ingredient, including wall paintings, texts written on walls or in advertisements, names of cafes and so forth.  In the position as a street photographer or documentary film maker,  Ed van der Elsken could be extremely open, direct, quick and intense. He could be even insistent towards the ones he wanted to photograph, mostly combined with some kind of impudent humour. It is this mixture, often not associated with the documentary street film or imagery, that makes Ed van der Elsken ‘s work so highly individual and unique and thus so important for late 20th Century film and photography.   As many photographers of his time, Ed van der Elsken's central interest as well as livelihood (next to working for magazines) was creating books. He started his professional education at art school as a sculptor. He stopped, to escape the Arbeitseinsatz. Ed van der Elsken turned towards photography after the war influenced by the American and British photojournalistic magazines, and especially by the photographs of Weegee and his book Naked City.  When his hopes for a new, open and free socialistic direction of society in Holland after the war did not immediately happen, van der Elsken went to Paris. There he found a group of young people in the same disappointed, almost nihilistic mood as himself. He made the book Love on the left bank, which appeared in 1956. The book made him instantly internationally famous. His well-known books that followed were Jazz, Sweet Life, about his travels around the world as well as his book Amsterdam!.   In 1971 Ed van der Elsken received the State prize for film for his film De verliefde Camera (The Camera in Love). His films, like his photographic body of work are closely related in style and content and were experimental and different from the beginning. In his last film Bye (1990), documenting his cancer until his death, Ed van der Elsken advises the viewer. „Be strong everybody. Take care. Show who you are.“ This perhaps best describes Ed van der Elsken’s body of work and his life.   Ed van der Elsken’s work has been shown in countless exhibitions in museums and galleries around the globe from 1953 until now. His work is housed in the public collections of: Rijksmuseum, Amsterdam, Stedelijk Museum, Amsterdam, Nederlands Fotomuseum, Art Institute, Chicago, Modern Art Museum, Kawasaki, Museum of Modern Art, New York, Bibliotèque Nationale, Paris to name but a few.  For further Information, Interviews with Anneke Hilhorst van der Elsken, press images, please contact: Florence  Baur, info@f56.net