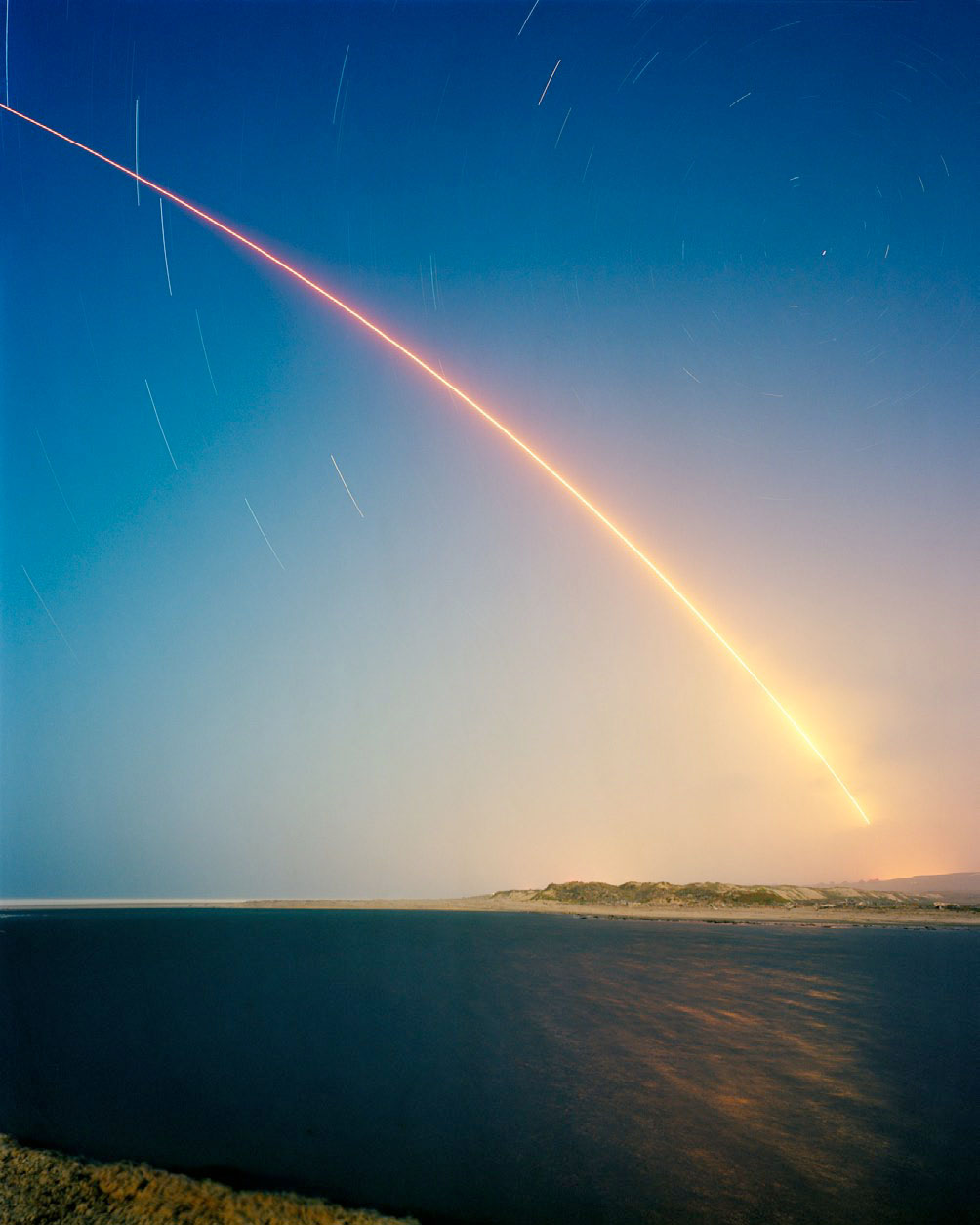 We are delighted to announce Full Spectrum Dominance, the first solo exhibition of work by Simon Norfolk at Michael Hoppen Contemporary.
This new series of photographs of military rocket and missile launches in America continues Norfolk’s exploration of the Sublime in the landscape. To capture these images, Norfolk gained access into the guarded world of satellite launches and nuclear missile tests at locations including Cape Canaveral and Vandenberg Air Force Base in California
These missiles and rockets are born in utter secrecy, launched from closed military bases and live out their lives in the soundless dark of deep space. They are what Norfolk terms the ‘Military Sublime’ the height of human achievement harnessed, not for beauty, but to find more ingenious ways for us to kill each other. There is a small moment in the lives of these missiles and rockets when they advertise their existence, in the 45 seconds or so that it takes for them to lift from their launch pads and disappear thousands of miles down range, to the heavens above. The focus of Norfolk’s work is this tiny crack in a dark and brooding world of secrets:
“The launch moment is the joining of two realms in the passing from one to the next; a fusion of the earthly and the heavenly; and the missile leaping across them. The everyday, the man-made and the industrial is transformed by fire into the Sublime and the God-like. From feet of Clay they stretch up, their heads in the stars.” Simon Norfolk 2008
Born in Nigeria in 1963, Simon Norfolk studied Philosophy and Sociology at Oxford and Bristol Universities. After a Documentary Photography course in
Newport, South Wales he worked for far-left publications until 1994 when he
gave up photojournalism in favour of landscape photography. Three books of
his work have been published, 'For Most Of It I Have No Words: Genocide,
Landscape, Memory,' (1998), 'Afghanistan: Chronotopia,' (2002) which won the European Publisher’s Award, a Foreign Press Club of America award and was nominated for the Citibank Prize, and his most recent book 'Bleed,' which was published in 2005.  There have been over 20 solo exhibitions of his work
including at the Imperial War Museum in London, the Nederland’s Foto
Instituut, the Academy of Fine Arts in Moscow and the Shanghai Art Museum, amongst others. In 2004 Simon won The Infinity Award from the ICP in New York and in 2005 Le Prix Dialogue in Arles. His work appears regularly in the New York Times Magazine and the Guardian Weekend.