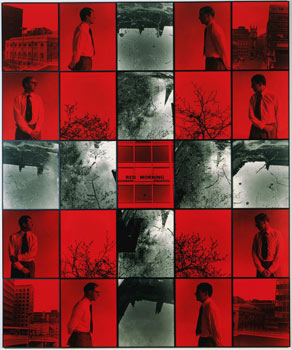 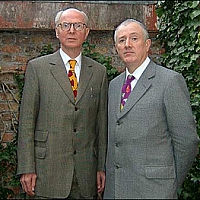 The Philadelphia Museum of Art will present a special installation devoted to the art of British artists Gilbert & George who have created all their art together since the late 1960s and are known for their dramatic, large-scale colorful pictures. Drawn from the Museum collection and supplemented by additional loans, Gilbert & George (May 2-November 2, 2008) includes 13 pictures indicative of the major phases of their art from the 1970s and 1980s. On view in the Alter Gallery (Gallery 176, first floor), the installation is the fifth in the Museum’s Notations series.

Gilbert (born 1943) and George (born 1942) met in 1967 while training as sculptors at St. Martin’s School of Art in London and shortly thereafter the two artists become Gilbert & George. From the outset of their career, the artists explored and redefined picture-making through which they could achieve monumentality. Dressed in suits and displaying decorous manners, Gilbert & George present an image at odds with the passion with which they expose desires and fears. As Living Sculptures, a self-designated term that defined their early presentations, the artists became both the object and subject of their own art, and set the tone for a practice making art accessible to all.

Gilbert & George use their art as a vehicle through which the universals of the human experience are made eloquent. They present a poignant and all-embracing vision of life where isolation, unhappiness and despair, nature and urban beauty are tenderly revealed.

This presentation of large-scale pictures by Gilbert & George traces their stylistic departure from austere black and white and monochromatic compositions of the 1970s to the bolder clashes of images and colors in the 1980s. The installation also includes a number of Postcard Sculptures, in which Gilbert & George used commercially produced images. The artists organized these images on a grid format, which has become part of their practice. Constantly aware of the changes in the social and political climate, Gilbert and George address head-on the burning issues of our times--be it social marginality, religion, the AIDS crisis or multiculturalism--while at the same time defining a unique visual language.

Gilbert and George won the Turner Prize in 1986 and represented the United Kingdom at the 2005 Venice Biennale. A comprehensive exhibition of the art of Gilbert & George organized by Tate Modern in London is currently traveling in the United States. Its final venue will be the Brooklyn Museum where it will be on view from October 3, 2008, through January 11, 2009.

Gilbert & George is the fifth in an ongoing series of gallery installations titled “Notations,” named after the 1968 book by American composer, writer, and visual artist John Cage—widely celebrated for his experimental approach to the arts. Cage’s Notations was an international and interdisciplinary anthology of musical scores by avant-garde musicians that also embraced contributions from visual artists and writers. At the same time Notations was an exhibition in book form, in which the scores doubled as drawings. “Notations” at the Philadelphia Museum of Art is a flexible tool used to explore aspects of contemporary art in the Museum’s expanding collection.

The Philadelphia Museum of Art is among the largest art museums in the United States, showcasing more than 2,000 years of exceptional human creativity in masterpieces of painting, sculpture, works on paper, decorative arts and architectural settings from Europe, Asia and the Americas. The striking neoclassical building stands on a nine-acre site above the Benjamin Franklin Parkway and houses more than 200 galleries. The Museum offers a wide variety of enriching activities, including programs for children and families, lectures, concerts and films.