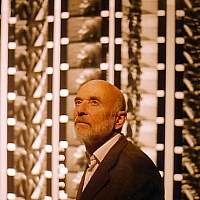 The name Peter Knapp instantly brings to mind the glossy pages of Elle magazine, as the publication’s legendary Artistic Director from 1960 to 1964 and then again from 1974 to 1978. As Knapp brilliantly showcased the works of celebrated photographers in the pages of Elle, he was simultaneously crafting a personal oeuvre of photographs that shed light on the controversial world of fashion and modeling.

Curated by Gabriel Bauret, this exhibition comes directly from La Maison Européenne de la Photographie in Paris. It retraces Knapp’s fascinating journey through the media that shaped his oeuvre: photography and cinema. Using the recent publication dedicated to Knapp by Les Éditions du Chêne as a guide, FIAF invites you to uncover the humanity found across Knapp’s ground-breaking career, both personally and professionally.