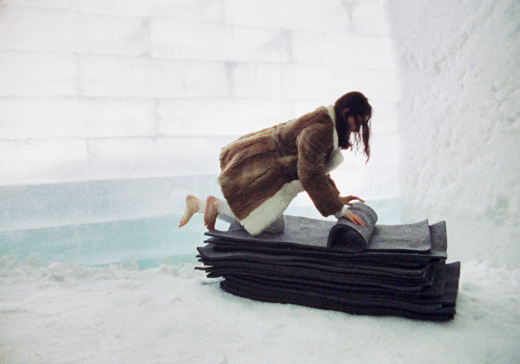 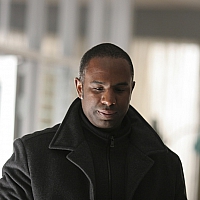 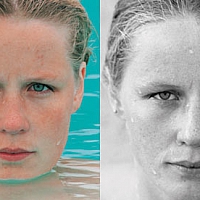 True North features the work of seven contemporary artists whose photographic or video-based projects evoke the tradition of Northern Romantic landscape painting as well as its legacy in later nineteenth-century photography. Yet unlike their Romantic antecedents, the works in this exhibition are historically and politically self-reflexive and call into question the notion of a pure, unchangeable North. Melancholic in tone, many of these photographs and video projections point instead to a certain loss of purity; they connect supposedly untouched northern landscapes to protagonists who attempt to inhabit, colonize, or commune with the harsh nature of the North.

Drawn largely from the permanent collection of the Solomon R. Guggenheim Museum, True North focuses on elegiac imagery by a group of international artists who have lived in or produced work about various northern locations, including the landscapes of Canada, Iceland, and the Netherlands.

Whether present or strangely absent, the motif of the horizon recurs in much of the work included in True North. In Roni Horn's large-scale installation Pi (1997-98), a circular horizon of photographs depicts various cycles that take place in and around Iceland: a couple and their habitual viewing of the daytime soap opera Guiding Light, the life cycle of eider ducks, and the tidal conditions of the surrounding sea. Olafur Eliasson's The glacier series (1999) presents a serial grid of 42 images of vast glaciers, documented from a prop plane. Denying its Romantic connotations, the horizon is pushed to the edges of each frame. In Elger Esser's Ameland-Pier X (2000), however, the horizon line remains one of the only visible features of a dematerialized white landscape.

Other works, such as Orit Raff's video Palindrome (2001) and Thomas Flechtner's Glaspass (Walks #10) (2001) detail the difficult futility of communing with a North that tests the limits of human influence and survival. Raff's female protagonist obsessively stacks felt in an attempt to create warmth--a futile gesture made all the more enigmatic by the juxtaposition of footage of a coyote comfortably navigating a frigid landscape. Often working in remote regions, Flechtner also questions the viability of humanity's presence in the frozen North. In Glaspass (Walks #10) he photographs his own ski tracks, which trace the topography of a barren snow-field. The skiers pictured in Armin Linke's Ski Dome, Tokyo, Japan (1998) on the other hand, enjoy an artificial North constructed within a now-demolished ski slope in the suburbs of Tokyo.

True North also touches on the North's function as a site of political antagonism and historical repression. In his video installation Nu·tka· (1996), Stan Douglas uncovers conflict in the wilderness of western Canada by pairing various spoken texts, which include eighteenth-century narratives of colonization, with two staggered, opposing films of this remote region. Foregrounding the North as a site of traumatic loss, Douglas presents a landscape seemingly shattered by human strife.

A place that most can only experience from a distance via various modes of mediation, the North as an idea presents an opportunity to examine the connection between reality and representation. Many of the works in True North probe this relationship, picturing a North that mutates, erases, or overwhelms.

The lunch lecture - a special kind of lunch break - offers an inspiring encounter addressing a specific theme in the exhibition and is followed by a lunch buffet.
Admission: € 9 / reduced: € 7

Visions of Permanent Ice - Searching for the Sublime in the Context of Ecological Change
Katja Sander
13.02., 27.02.

Each tour focuses on a special aspect of the exhibition. Afterwards brunch at the Café.
Admission: € 12 / reduced: € 9

Views of Everlasting White - On the Iconography of Icescapes
Alexandra Heimes
09.03., 23.03.

The Infinite as Sublime - Aspects of the Romantic Perception of Nature
Dr. Beate Zimmermann
16.03., 13.04.

Looking through a Lens: The Dialectics of Nature and Artificiality
Katja Sander
30.03., 06.04.


SPECIAL EVENTS
Artist's Talks:
Orit Raff, Stan Douglas, Elger Esser, Armin Linke und Thomas Flechtner
On the occasion of True North, five of the exhibition's artists will participate in a series of Artist's Talks at the Deutsche Guggenheim, offering insights into their works, which often engage the Romantic myth of the rough, untouched North.

If not otherwise specified, all events take place at the Deutsche Guggenheim.
All lectures in German unless otherwise indicated.
For English and French lectures please contact (030) 20 20 93-18.


Continuing Education for Teachers - No. 08.1-2090
13.02.2008, 4 p.m.
In cooperation with the Senatsverwaltung für Bildung, Wissenschaft und Forschung.
Registration: www.fortbildung-regional.de or schmidt@senbwf.verwalt-berlin.de


CHILDREN and YOUTH WORKSHOPS
Saturday, 23.02., 3 to 5:30 p.m. - Young Journalists Wanted!
Writing Workshop at the Deutsche Guggenheim (11 to 16 years)
Write your own article for the second edition of Junges Magazin Deutsche Guggenheim with a journalist.
Admission: € 5
Registration: (030) 20 20 93-11


HOLIDAY PROGRAM for Children (5 to 8 years)
Life on Ice
Who wouldn't love to go for a sleigh ride or build a snowman? At the Deutsche Guggenheim, we take a look at how the artists in the show portray the icy North and what kind of stories they tell. Next day we visit the Museum of Natural History where we learn how animals are able to survive in the ice and snow.


WEEKEND WORKSHOP for Children (7 to 10 years)
It's Melting!
In the exhibition True North, you can see views of northern landscapes. Let's find out together how they look through artists' eyes. Next day we visit the zoo, home of Knut, the polar bear we think you may have heard about. We learn more about the animals of the North and how climate change endangers their icy way of life.


Unless otherwise specified, all events will take place at the Deutsche Guggenheim.