Graciela Iturbide Torrijos : The man and the myth 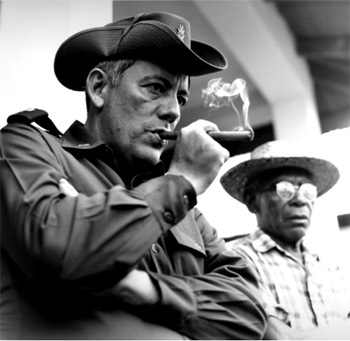 A unique exhibition of never-before-presented photographs of Graciela Iturbide, one of Mexico’s most celebrated photographers, of General Omar Torrijos; Panama's leader from 1968 - 1981 and one of the best-known 20th century figures throughout Latin America.

Artists have often lent their work to help tear down narratives and redefine prevailing concepts of historical account. Graciela Iturbide, who befriended General Omar Torrijos in the 1970s, offers her sparkles of memory and understanding from a different perspective of photojournalism or
documentary photography.

Iturbide explores in an intensely personal homage an era of contemporary Latin American life through the persona of a single man whose changing role in that history is emblematic of the times. She establishes both place and identity not only of her distinguished subject but the context of country, the land itself, in aesthetic and vernacular style alike. Presented for the first time, this complex body of work redefines the photographic image of General Omar Torrijos by looking at it as a document and metaphor, often deconstructing and reconstructing Iturbide’s own personal intersections with her subject. The symbolic and expressive imagery of the works, produced three decades ago, offer a visual paradigm that calls on memory, and a re-presentation of facts that conjure an emotional bond between subject and viewer, whether affirmative or oppositional.

Torrijos was a charismatic political and military leader who redistributed land and wealth, and died tragically in a 1981 plane crash. The Torrijos legend is of a man of action, yet an idealist strategist and a polemic figure. The recent populist shift in Latin America recalls an examination of this earlier period of history, making the personality of Torrijos newly relevant. Iturbide provides an insightful portrait of Torrijos as a popular myth that blends tradition and modernity.

In conjunction with the exhibition, Americas Society will host the following public programs: on Wednesday, January 30th at 7:00 p.m. Guest Curator Nan Richardson will give a curatorial tour of the exhibition; on Thursday, February 28th at 6:30 pm we will host a dialogue between Graciela Iturbide and Cuauhtémoc Medina; and on Thursday, March 27 at 6:30 pm Robin Greeley, Linda Klich and Anna Indych Lopez will participate in a panel discussion that will render a context for Iturbide’s photographic work. For reservations please call 212.277.8359 or email cuture@americas-society.org

The show is curated by Nan Richardson and is organized by the Americas Society in conjunction with Umbrage Editions. Americas Society gratefully acknowledges the generous support of Galería Emma Molina, Graciela Iturbide, the Bruce T. Halle Family Foundation and La Fundación/Colección Jumex. Additional support has been provided by the Mexican Cultural Institute of New York.

Graciela Iturbide was born on May 16, 1942 in Mexico City. She studied filmmaking with a special interest in scriptwriting and later studied still photography in the Centro Universitario de Estudios Cinematográficos, at the Universidad Nacional Autónoma de México from 1969-1972. It was there she met Manual Álvarez Bravo, and in 1970 and 1971 she apprenticed with him.

Major retrospectives of her work have been held at Museo de Arte Contemporáneo de Monterey, Mexico (1996) and at the Philadelphia Museum of Art (1997-98). She is the recipient of a Eugene Smith Grant in Humanistic Photography (1987) and a John Simon Guggenheim Memorial Fellowship (1988). Iturbide lives and works in Coyoacán, Mexico.