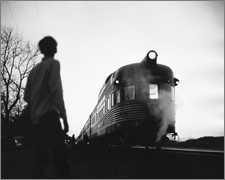 Robert Mann Gallery has acquired a rare collection of extraordinary railroad photographs by Richard Steinheimer, considered to be among the greatest American railroad photographers. A pioneer in the field, he documented the railroad's transition from steam to diesel power, using elaborate lighting equipment to photograph by night and even positioning himself atop moving trains to capture them in motion. His appreciation for the the American railroad and the landscape of the American West is immediately apparent in his exceptional body of work. To view an online gallery of the photographs please click here. For more information or to make an appointment to view the work, please contact the gallery. Richard Steinheimer was born in Chicago in 1929. In 1939, when his family moved to Glendale, California, their house was located near the Southern Pacific main line. In 1945, he began photographing with a Kodak Brownie camera, and two years later began to work with a medium-format Speed Graphic camera, with which he created some of the most beautiful night photographs of railroads ever made. He attended San Francisco City College and from 1956 to 1962 worked as a photojournalist on staff of the Marin Independent Journal. In 1963, his book Backwoods Railroad of the West was published and eventually became one of the most collectible railroad books. His work has been publishedTrains Magazine, Railfan, Locomotive & Railway Preservation, Vintage Rail, and numerous books, including the recent publication of A Passion for Trains (W.W. Norton, 2005). He currently lives in Sacramento, California.