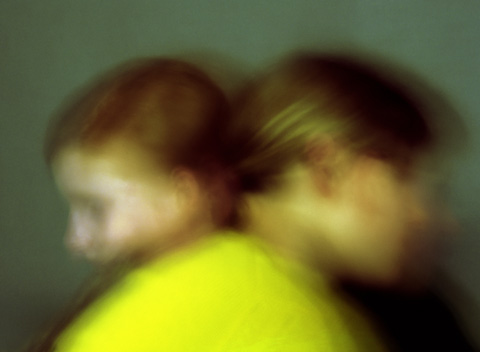 Kyungwoo Chun's artistic career presented itself during the past years as a bridge between Korea and Germany, where he has been living since the mid-1990s. His works are characterised by a close relation between artist and the protagonists depicted. Chun represents them by extending the exposure time, while he himself directs the scene. This procedure is repeated in performances, videos or photographs. In the exhibition "Silence is Movement" the series "Believing is Seeing" is presented for the first time in Germany. The viewer is confronted with blurred features, especially the eye areas seem abstract. By this means, the depiction gains a peculiar kind of lightness and alienation. In this series, Chun purposefully portrayed only young people who are blind. The pictures were taken during a period of between thirty and forty minutes. During that time, the artist approached the protagonists by asking specific questions concerning their sensitive relation to the outside world: to what extend do they see what cannot be seen or which are the imaginations substituting vision. The series "Versus" presents a double portrait as investigation of human relationships. Two women were to lean against each other and remain in this position for a period corresponding to the sum of their ages. This then is the starting point of this work, namely a performance in which the participating persons will feel a strong exchange of their power, competition, personality and commonality. To the viewer, this encounter appears very intensive, comparable to the general trivial social interaction. The exhibition is accompanied by Chun's video works. In "Silence is Movement" the artist examines social conditions further while observing a group of pupils from an areal view. They were placed sitting on chairs until the scene is conquered by disquietness and inconvenience. From his perspective, the artist enjoys the reaction of the participants of his human experiment. Tereza de Arruda, curator