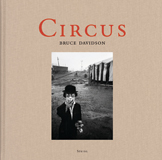 Bruce Davidson's latest book brings together his work in three very different American circuses across a decade of the mid-twentieth century. Davidson's poetic and profound eye reveals not only the circus that is passing away, but takes us through what could be called the eternal circus. At a three-ring show in 1958 Davidson climbed to the top of the tent to view the performances of famous lion-tamer Clyde Beatty and human-cannonball Hugo Zacchini. His deeper interest was in the daily lives of circus people – the roustabouts, riggers, a pretty girl who rode an elephant in the “spec”, and an intimate series of a dwarf clown. Most of these pictures are published here for the first time. In 1965 at a huge multi-ring coliseum show, Davidson took a more critical look at performances under a steel and concrete environment. Continuing behind the scenes his vision became sharper and more surreal. Finally, in 1967 Davidson caught the elegant exuberance of an Irish one-ring circus. He photographed performances that are the essence of circus, including an eye-to-eye encounter with an exceptional trapeze artist made from a perch at the top of the tent. Price UK £35.00 US $60.00 EC €50.00 Bruce Davidson began photography at the age of ten in Oak Park, Illinois. He attended the Rochester Institute of Technology and Yale University and was later drafted into the army and stationed near Paris where he met Henri Cartier-Bresson, one of the four founders of the renowned international cooperative photo agency, Magnum Photos. After military service, in 1957, Davidson worked as a freelance photographer for Life Magazine and in 1958 became a full member of Magnum Photos. From 1958 to 1961 he created such seminal bodies of work as The Dwarf, Brooklyn Gang, and the Freedom Rides. He received a Guggenheim Fellowship in 1962 to photograph what became a profound documentation of the Civil Rights Movement in America. In 1963 the Museum of Modern Art in New York presented his work in a solo show. In 1966 he was awarded the first grant for photography from the National Endowment for the Arts, and spent two years bearing witness to the dire social conditions on one block in East Harlem. This work was published by Harvard University Press in 1970 under the title East 100th Street and was later republished and expanded by St. Ann's Press. The work became an exhibition that same year at the Museum of Modern Art in New York. In 1980 he captured the vitality of the New York Metro's underworld that was later published in his book Subway and exhibited at the International Center for Photography in 1982. In 1995 he photographed the landscape and layers of life of Central Park. Davidson continues to create classic bodies of work from his 50-year career that have been extensively published in monographs and are included in all the major public and private fine art collections around the world.