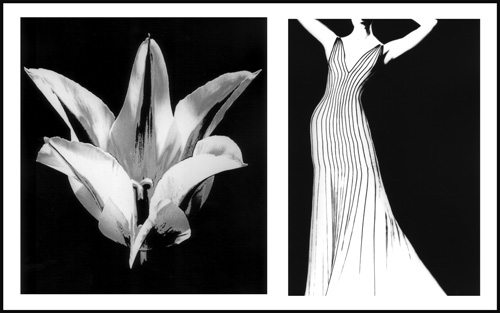 Lillian Bassman was born in 1917 in Brooklyn, New York. She reigns today as the doyenne, one of the last great women photographers of the post war period. She was married to Paul Himmel in 1935 and is one of the truly great artist couples, literally of the last Century, they have been married for more than 73 years! Lillian Bassman's work in black and white is the experimental and romantic vision, as seen mostly in Harper's Bazaar in the 1950's that brought a sophisticated, new aesthetic to print photography. From the 1940's Bassman was at the cutting edge of fashion working as both fashion photographer and art director for Harpers Bazaar. At Junior Bazaar she worked with young photographers such as Richard Avedon, Robert Frank, Louis Faurer, Arnold Newman and Paul Himmel. Then under Russian émigré and Modernist guru Alexey Brodovitch (and while using George Hoyningen-Huene's darkroom), Bassman started shooting pictures herself - diffuse, moody images with an idiosyncratic vocabulary of gestures and an unsettling edge. With their blurred silhouettes and unusual compositions - a gown modelled in a window to resemble a butterfly, a dramatic lingerie model covering her face, a pair of arms hugging naked shoulders- Bassman's images flirts with abstraction and conjures up a sensuous dream world. Bassman soon was in constant demand and, in addition to her editorial work shot campaigns for Chanel and Balenciaga. By the 1970's Bassman's interest in pure form began to clash with fashion's changing aesthetic. Her increasing disenchantment led her to abandon fashion photography in favour of her own projects. In a bold attempt to free herself creatively from the past, she jettisoned 40 years of negatives and prints - her life's work. Over twenty years later, luck resurrected a forgotten bag, brimful of hundreds of images. Now Bassman is enjoying a resurgence at fashions forefront, with exhibitions at museums and galleries worldwide. At 90, she is now working with digital technology and abstract colour photography to create a new series of work. Her work stands testimony to one of the great creative personalities of our time. (Text by Martin Harrisson, Lillian Bassman, 1997) Paul Himmel (b. 1914). As a newly buoyant New York City emerged as an International Art Centre in the 1940's many of the great photographers of the latter part of 20th Century were embarking on their careers. Paul Himmel was among those closely allied to this cultural firmament. His pictures became very well known through Steichen's important exhibition in the 50's "The Family of Man". In 1935 Paul Himmel and Lillian Bassman were married and they both enrolled at the New School, under the legendary Art Director Alexej Brodovitch. His first Fashion Shots were published in Junior Bazaar. Soon he was one of the few photographers working for both Vogue and Harper's Bazaar. There are no negatives surviving of this time. The photo-journalistic mode at which Himmel excelled was quickly going out fashion in the 50's and he was becoming more and disillusioned with commercial photography. Thus, Paul Himmel started his own projects: His series on Boxers - Circus and Ballet. Interested in movement Paul Himmel's book Ballet in Action was published in 1954. George Balanchine one of the great leading choreographers rightly saluted Himmel's achievement of succeeding in 'the almost impossible task of getting stills that look like movement....the sense of and the sequences of movement are present.". His innate feeling for dance as much as the sophistication of his photographic technique (he used very long exposure times) was a distillation of the very essence of dance, conveyed in poetic and graphically powerful images. Himmel continued on this path and started experimenting more with grain structure, that he radically transformed into a series of silhouetted and elongated forms abbreviated almost to the point of abstraction. The critics though seemed not to be interested in this work, which ran counter to anything in contemporary photography. Also his next body of work, printing black and white negatives on colour paper, solarizing the result with couloured light, to achieve much of the intensity and starkness of much of the Pop Art then current, did not seem to interest the critics. By 1969 Himmel was disenchanted with photography and gave it up to become a psychotherapist. Reconsidered today, much of his oeuvre appears remarkably prescient and it is fortunate enough that enough has survived finally to vindicate and demonstrate a most valuable contribution to photographic history. 1996 Paul Himmel was highly celebrated with his first one-man exhibition at Howard Greenberg Gallery, New York followed by a retrospective at the James Danzinger Gallery, New York. In 2003 his work was shown in New York and for the first time ever Lillian Bassman and Paul Himmel showed together at Gallery f5.6 in Munich.