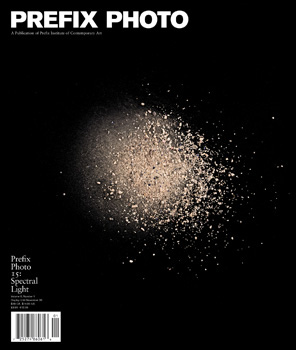 Subscribe at http://www.prefix.ca Prefix Institute of Contemporary Art is pleased to announce the release of issue 15 of Prefix Photo magazine. Addressing the theme of “spectral light,” editor Scott McLeod has written: “How does one write about the significance of light for photography, when it is not merely significant but integral to photography, as it is to vision and, indeed, to life itself? Bring the subject of light under consideration and, with great speed, it unfolds, spiralling endlessly into ever-expanding fields. The study of light becomes inseparable from that of time, space, history, memory, mourning and death.” The issue features essays on a host of photo, media and installation artists, including: Janine Marschessault on the radical humanism of http://www.prefix.ca’s Manufactured Landscapes and Edward Steichen’s The Family of Man. A Dazibao intervention, Out of Space: Photography and the Sculptural Imagination, featuring portfolios of five diverse artists with text by Susan Edelstein. Maia-Mari Sutnik on Spring Hurlbut’s series Deuil, which uses cremated remains to produce formations reminiscent of constellations, galaxies and other celestial phenomena. Other contributors include Fadi Abou-Rihan, Albano Afonso, http://www.prefix.ca, John Duncan, Julio Grinblatt, Spring Hurlbut, Tania Kitchell, Nestor Krüger, Marie-Jeanne Musiol, Sarah Pickering, Daniel von Sturmer, http://www.prefix.ca, Amon Yariv and more. Prefix Photo is available by subscription and in fine bookstores and newsstands in Canada, the United States, the United Kingdom, Portugal, Spain, Greece, Turkey, Singapore and China. For their assistance with the release party in Toronto, Prefix Institute of Contemporary Art gratefully acknowledges its Supporting Sponsors C.J. Graphics, à la Carte Kitchen, and Steam Whistle Brewing. In Vancouver, Prefix gratefully acknowledges its Supporting Sponsor, the Sutton Place Grande Hotels Group, and the host of the event, Morris and Helen Belkin Art Gallery. In Montréal, Prefix gratefully acknowledges the host of the event, Dazibao, centre de photographies actuelles. Prefix Photo is published with the support of its staff, volunteers and patrons, as well as the assistance of the Ontario Arts Council, the Ontario Media Development Corporation, and the Canada Council for the Arts. Prefix Photo also acknowledges the financial support of the Government of Canada through the Canada Magazine Fund toward its editorial and production costs.