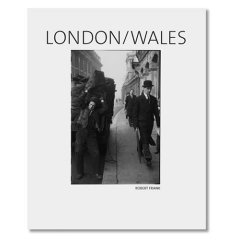 New York Times Magazine, By W.S.Di Piero These remarkable pictures jump alive and insinuate themselves into our consciousness with qualities that later gained notoriety in "The Americans." Book Description Between 1949 and 1953, Robert Frank continually returned to Europe from his new home in New York to take photographs in France, Switzerland, Spain, and Great Britain, photographs that show the development of his uniquely humanist, poetic, and realist eye. In 1951 and early 1952, Frank visited London--"I liked the light, I liked the fog."--and set out to photograph the unique atmosphere of the city. He followed British financiers around the City, capturing them in their traditional top hats and long coats, creating images that depict them in a poetic dance with their fog-shrouded environment. He shot pictures of workers, men delivering coal, children playing on the streets, people waiting or relaxing in the parks, and images of poverty. In these photographs he juxtaposed money and work, wealth and poverty, creating a dynamic photographic project that has never been shown before in its entirety. Then, in March 1953, before the impending nationalization of the country's coal mines, Frank travelled to the town of Careau, in Wales, to photograph the coal miners whose lives revolved around their work. One miner, Ben James, and his family became the subject of a picture essay (originally published in a 1955 issue of U.S. Camera) in which Frank downplayed the classic modernist photographic moment in favor of a more provocative form that offered informal, revealing glances rather than an official document. In Robert Frank: London/Wales, Frank returns for the first time to these old negatives. The volume explores a stylistic transformation in his work, a period of development which saw his mode of photography move from an innovative romanticism to a highly charged, metaphorical realism. These two consecutive projects, realized in London and Wales between 1951 and 1953, set the stage for his truly groundbreaking documentary, The Americans, completed just a few years later. You got eyes. --Jack Kerouac writing about photographer Robert Frank Introduction by Philip Brookman. Hardcover, 9 x 11 in., 208 pages, 90 Tritones illustrations Relié: 128 pages Editeur : Steidl Publishing (avril 2007) Langue : Anglais