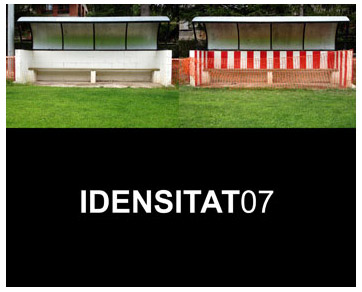 HOME / AWAY Call for projects open until November the 15th, 2006. http://www.idensitat.org ________________________________________ IDENSITAT 07 starts its fourth edition calling for projects. It is addressed to artists who offer proposals in the field of public space, from a multidisciplinary perspective and having the will of interacting in the social space of the territory where the project is promoted. IDENSITAT is a programme developed biannually with the aim of offering mechanisms for the structuring of creative projects in the field of public space and that are related to the territory. Since 1999 a series of projects and activities have been done in the town of Calaf, and progressively other relations have been established with more towns, with the aim of allowing the development of projects that can be adapted to the own and multiple specificities arising out from the singularity of a place. IDENSITAT 07, just like in the previous edition, takes place in two towns of the Barcelona province, Calaf and Manresa, and moreover expands the territorial network with the development of a project in the town of Mataró, supported by Can Xalant. TERRITORIES IN PROCESS IDENSITAT 07 is conceived as an observatory of the territory and a laboratory for the development of projects, offering the opportunity to intervene in an active way in the urban processes, precisely when there is a phenomenon of expansion and growth, as well as a redefining of the identities that characterise them. The aim is to favour a field of action, experimentation and debate, which started in the previous edition of the programme (IDENSITAT 05). Considering the moment of intense urban evolution going on now in Calaf, Manresa and Mataró, the participants must articulate certain artistic activities which include critical, analytic and propositional regards that can involve certain groups of population; or that permit formulating alternative proposals at the same time, so that it is possible to perceive, face and participate in the urban processes taking place in a specific moment. CALLING FOR PROJECTS The call IDENSITAT 07 is structured around two categories of presentation, having each different goals and characteristics. One points to the production of projects and the other one for already implemented proposals (documentary projects). HOME / AWAY is the motto chosen for a possible project development based on the tension between the two concepts: the belonging to a territory, the identity issues, the long-term cultural structuring, etc; being opposed or related to the superficial, distant, curious and less engaged regard, the tourist experience, or others which could be stated thanks to the projects emerging in this call. PRODUCTION OF PROJECTS linked to a place and activated through procedural strategies and strategies of cooperation with social groups; or with projects intervening specifically or incisively in the public space of these different towns, existing the possibility of using the infrastructure and means already available in the territory. PROJECTS OF DOCUMENTATION. This category gathers those works developed in other contexts, thus promoting their diffusion and linking them to different activities of debate, exposition and edition organised by IDENSITAT. SELECTION COMMITTEE. The selection committee of this call will be constituted by Santiago Cirugeda, architect and artist; Amanda Cuesta, independent curator; Alicia Murria, art critic and director of the magazine ARTECONTEXTO; Ramon Parramon, director of IDENSITAT; Lorenzo Romito, architect and member of STALKER. ECONOMIC ENDOWMENT. The economic endowment destined to each selected project in the section PRODUCTION OF PROJECTS will be determined by its budget, having available a maximum amount of 11,000 €. In reference to the DOCUMENTATION PROJECTS, the economic endowment might depend on the presentation format of the project; having available a maximum of 1,500 €. The deadline for this call of projects is November the 15th, 2006. More detailed information about the call Idensitat 07: http://www.idensitat.org To contact the organisation, please write to idensitat@.idensitat.org Organisation: Calaf Town Council, Manresa Town Council, Generalitat de Catalunya, Diputació de Barcelona and Can Xalant (Mataró).