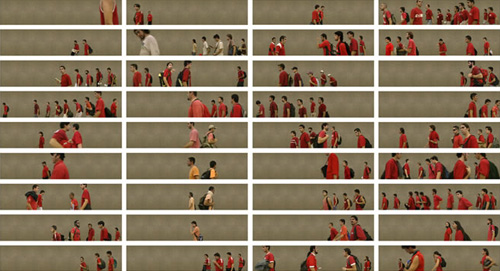 A NAK exhibition in the context of the project "After Cage - 24 collections in motion" August 27th - November 5th, 2006 The Chilean and Berlin based artist Pablo Zuleta Zahr (*1978) presents at NAK a solo show, which features photo works as well as the four channel video installation Butterfly Jackpot. The video installation was exclusively produced by NAK and Z33, Hasselt, Belgium for the euregional project After Cage. Zuleta Zahr's works integrate the big opposites of life, like detail and total composition, individuality and mass and also chaos and structure, in a form, which dosen't deny the existence of this wide range, but let's its complexity be experienced in a simplified way. His photo works, which emerge since 2003, are in a way an inversion of the principles of photography. Out of a multi hour take with a video camera, which is adjusted straight to one point and to the people passing through, Zuleta Zahr distils common criteria of passers-by. Sorting them by sex, age and the manner of clothing or other accessories, this categorisation isolates on one hand the individual from the mass, but sorts it on the other hand back into a stereo typed group, which unmasks individuality as illusion. The video installation Butterlfly Jackpot emerged from an invitation by NAK, to conceive a work for the euregional network project After Cage. Zuleta Zahr therefore goes back to essential thoughts of the musician and artist John Cage (1912-1992) and continues these to social interactions. The encounter of four girls from four cities of the Euregio is fragmented by the artist into time segments, places and image variables, which continue themselves in the four cities while one day moves on. Given that the roles of the girls are rotating as well, neither the original spontaneity of the first intercultural meeting nor the individuality of the particular individual remains unique. The severity of the concept compared to the manifold variabilities of life opens up the possibility to experience the effect of structures, mathematical chaotic repetitions and the role of chance. Guided tours: September 10th, 3 pm and October 22nd, 3 pm, as well as in context of Art Route Aachen: September 23rd, 2 pm, 4 pm and 6 pm and September 24th, 2 pm and 4 pm.