Shomei Tomatsu "Skin of the Nation" 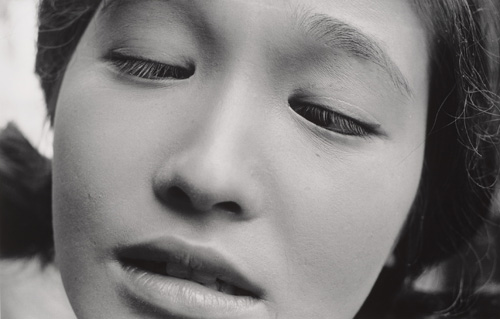 "Skin of the Nation" focuses on the surfaces, faces, clothes and territories that, like a map, provide information about Japan's mood and sensitivities. Shomei Tomatsu, who was born in 1930 and grew up during the military regime in World War II, belongs to the "faithless" generation, as he himself has formulated it - to the generation that experienced the shock of Japan's change from a closed into an open society. His first photographs taken in the 1950s were dedicated to poverty-stricken life in post-war Japan, to wounded soldiers, potters, farmers struck by floods, school children and students from the poor social classes. At the end of the 1950s, he founded the "Vivo" photo agency with Kikuji Kawada, Eikoh Hosoe and others. During the 1960s he was regarded as the most important and influential post-war photographer. His friends in other media were the film-maker Nagisa Oshima, the theatre director Shuji Terayama, the Butoh dancer Tatsumi Hijikata and the writer Kobo Abe. This major retrospective represents the first comprehensive overview of the work of Shomei Tomatsu and bears witness to his status within the Japanese post-war avant-garde and his role in the development of modern Japanese photography. With approximately 260 photographs, the exhibition shows all Tomatsu's major groups of works, for example "Nagasaki 11.02" - the shattering essay on the effects of the atom bomb and the lives of the survivors - and "Chewing Gum and Chocolate", his first attempt at capturing the far-reaching Americanisation in Japan after the war - with the huge dichotomy between the military threat and the cultural attraction, the seduction of Hollywood glamour. Shomei Tomatsu takes us from traditional Japan to the Japan of economic success and shows the effects of these economic, political and cultural changes. His approach, his documentary-based, lyrical and symbolic way of seeing things influenced generations of Japanese photographers. The father of modern Japanese photography, he influenced Nobuyoshi Araki and Daido Moriyama just as much as, later on, Seiichi Furuya, Takashi Homma and Yoshiko Seino - all of them photographers whose work has been shown in the Fotomuseum Winterthur and who are now represented in the museum's collection. The exhibition was created by the San Francisco Museum of Modern Art and the Japan Society, New York. The curators are Sandra S. Phillips and Leon Rubinfien. With the support of the Vontobel Foundation, Zurich Publication on the exhibition: Shomei Tomatsu - Skin ot the Nation. Published by San Francisco Museum of Modern Art, in collaboration with Yale University Press, New Haven and London. With texts by Leo Rubinfien, Sandra S. Phillips and John W. Dower, Preface by Daido Moriyama. 224 pages, 131 Duplex- and 28 colour illustrations, format 24 x 26,5 cm, hardcover with dust jacket. Exhibition price: CHF 59.- Symposium: Friday, 27 October, 6 p.m. till midnight: "Japanese Night", the evening symposium on Japanese photography and lifestyle from the past 50 years. More under:www.fotomuseum.ch/VERANSTALTUNGEN.30.0.html Photography by Shomei Tomatsu Eiko Oshima, Actress in the Film Shiiku (Prize Stock), 1961, printed 2003. Gelatin silver print, 27,5 x 42,7 cm. Promised gift of Shirley Ross Sullivan to the San Francisco Museum of Modern Art © Shomei Tomatsu