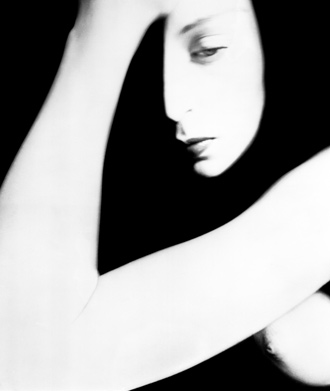 British master photographer Bill Brandt's wide ranging work is explored in a comprehensive exhibition, Bill Brandt: A Retrospective, on view at the Boca Raton Museum of Art from June 28 through August 27, 2006 From Brandt's early work that documents fixed social contrasts of pre-World War II life in Britain to his later experimentation with a surreal style, this exhibition spans 50 years of Brandt's far reaching career in an extensive assemblage of 155 vintage gelatin silver prints from the Bill Brandt Archive in London. Brandt's vision, unconfined by easy categories, extends from photojournalism to moody, atmospheric landscapes to stark, revealing portraiture to high-contrast nudes, distorted with very wide-angle lenses. Brandt (British, b. Germany 1904-1983) once wrote, "Photography is still a very new medium and everything is allowed and everything should be tried." Although driven by historic periods and events, Brandt's endless invention and continual search for ways to expand the medium makes his work fresh and timeless. So strong was his presence during the middle of the twentieth century that histories of photography often imply that he was the only photographer in Britain during that period. "No other British photographer has made so many memorable photographs as Bill Brandt. He excelled in all fields -social scenes, Surrealism, night photography, wartime documentary, landscape, portraiture and the nude," writes Mark Hayworth-Booth, curator at the Victoria and Albert Museum, London. Brandt worked as Man Ray's assistant in Paris in 1929 and returned to London in the 1930s to become a freelancer for the Weekly Illustrated. Some of this work was later published as his first book, The English at Home. In contrast with his contemporaries in Depression-era America, Brandt developed an expressive, high-key style that pushed accepted boundaries of documentary and journalism when photographing the destitute villages and mining towns of northern England. "He photographed sharp social contrasts, the glittering surfaces of a rich and imperial city, compared with its humble East End; the coal-black buildings of the northern industrial heartland and the cool, moonlit streets of black-out London during the period of eerie calm at the beginning of the Second World War," describes Hayworth-Booth. During the "blitz" of World War II, Brandt photographed London by night and followed the crowds into the Underground to escape the bombs. After the war, Brandt's work underwent a shift in focus. He left his documentary style behind and returned to his interests in the surreal. As Brandt himself explained it, his "main theme of the past few years had disappeared; England was no longer a country of marked social contrast." Brandt then turned to nudes, portraits and landscapes. Brandt's formally plastic and haunting nude studies from this period were published in Perspective of Nudes (1961) and are considered today as some of his most innovative work. Using an old wooden plate camera with an ultra-wide-view lens, Brandt defined new territory showing among other things, photography's kinship with sculpture and modernist abstraction. At the same time, Brandt developed the symbolist potential of photography in a series of landscapes inhabited by the spirit of Romanticism and directly inspired by the writings of poets and novelists such as Emily Brontë. Himself an important figure of the British artistic and intellectual scene, Brandt produced striking portraits of celebrated contemporaries, such as Francis Bacon, E.M. Forester, Rene Magritté and Henry Moore. In 1969, New York's Museum of Modern Art honored Brandt with the first retrospective of his work. Several solo shows followed at both museums and galleries in Europe and the United States. In 1981, two years before Brandt's death, the Royal Photographic Society inaugurated its National Center of Photography in Bath with a retrospective. Bill Brandt: A Retrospective, curated by John-Paul Kernot, is organized by the Bill Brandt Archive and is circulated by Curatorial Assistance Traveling Exhibitions (CATE), Los Angeles. Also on display through August 27 are: 55th Annual All Florida Juried Competition and Exhibition and the Boca Raton Museum Artists' Guild Biennial Exhibition.