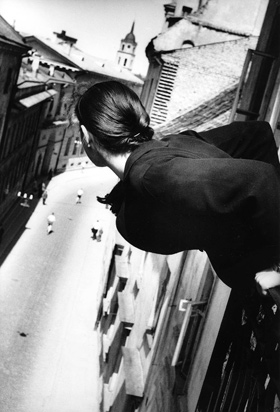 Talk by Antanas Sutkus: Friday, 19 May 2.30 pm at Photo-London Photography Fair www.photo-london.com Exhibition White Space Gallery is pleased to announce first UK solo exhibition by Antanas Sutkus (born 1939), Lithuania's most famous photographer. As leader of the "Great generation" of Lithuanian photographers who made their mark in the 1960s, Sutkus has been a strong influence on subsequent development of photography in the Baltic country. His lucid and moving images of everyday life have been compared to the work of the greats of 20th-century photojournalism such as Henri Cartier-Bresson and Andre Kertesz. This exhibition will present his most important work, including his series People of Lithuania, an ongoing project begun in 1976, which shows the changing life of Sutkus's homeland. Also on display will be images from one of his best known series of photographs, documenting the visit of Jean-Paul Sartre and Simone de Beauvoir to Lithuania in the summer of 1965, at the height of the cold war, and their meetings with writers and other intellectuals. This exhibition is organised in partnership with the Lithuanian Ministry of Culture Antanas Sutkus Born in Lithuania in 1939, Antanas Sutkus started his photographic career as a photojournalist, and since 1969 has been working as an independent photographer based in the capital city Vilnius. He was one of the co-founders and President of the Photography Art Society of Lithuania (PASL), which championed photography as an art form, and is credited with gaining recognition for Lithuanian photographers on the national and international scene. Sutkus's main subject is man in all situations and moods. His aim, he has written, is "to make an attempt at drawing a psychological portrait of contemporary man ... because future generations will judge our way of life, our culture and our inner world on the basis of photographs." In 2001-2002 he won the Erna & Victor Hasselblad Foundation Grant (Sweden) for "Documentation and conservation of Antanas Sutkus's archive of photographs". His recent shows include FotoGrafia photography festival, Rome, 2006; Photography Gallery, Paris; Galerie Susanne Albrecht (with Martin Parr), Munich, 2005; PHP, Prague, 2004; Fotografie Forum, Frankfurt am Main, 2003; "Clear Vision: Photographs from F.C. Gundlach's Collection", Internationales Haus der Photographie, Deichtorhallen, Hamburg, 2002. His works are in the collections of Lithuanian Museum of Art, Vilnius; National Library, Paris; Museum of French Photography, Paris; Museum of Photography, Helsinki; International Center of Photography, New York; Institute of Arts, Chicago; Art Museum, Minneapolis; Art Museum, Boston; Victoria and Albert Museum, London; Museum of Modern Art, Stockholm; The Moscow House of Photography. Publication This exhibition will be accompanied by his recent book Daily Life Archives. 1959-1993. Unpublished photographs. Published by the Union of Lithuanian Art Photographers with the help of Hasselblad Foundation. Vilnius. 2003.