Charleston (S.C.)--History--Civil War, 1861-1865.
The Library of Congress has acquired 540 rare and historic Civil War stereographs from the Robin G. Stanford Collection. The first 77 images are now online, including 12 stereographs of President Lincoln’s funeral procession through several cities and 65 images by Southern photographers showing South Carolina in 1860-61.

The Library of Congress acquired the collection through a purchase/gift from Robin G. Stanford of Houston, Texas. During the past 40 years, Stanford has collected stereographs of both the Civil War and Texas. Through the assistance of the Center for Civil War Photography and retired Library of Congress curator Carol Johnson, the Library was allowed to select images that significantly improve its representation of the war and of life in mid-19th-century America. The center has also funded the digitizing of the first group of stereographs. 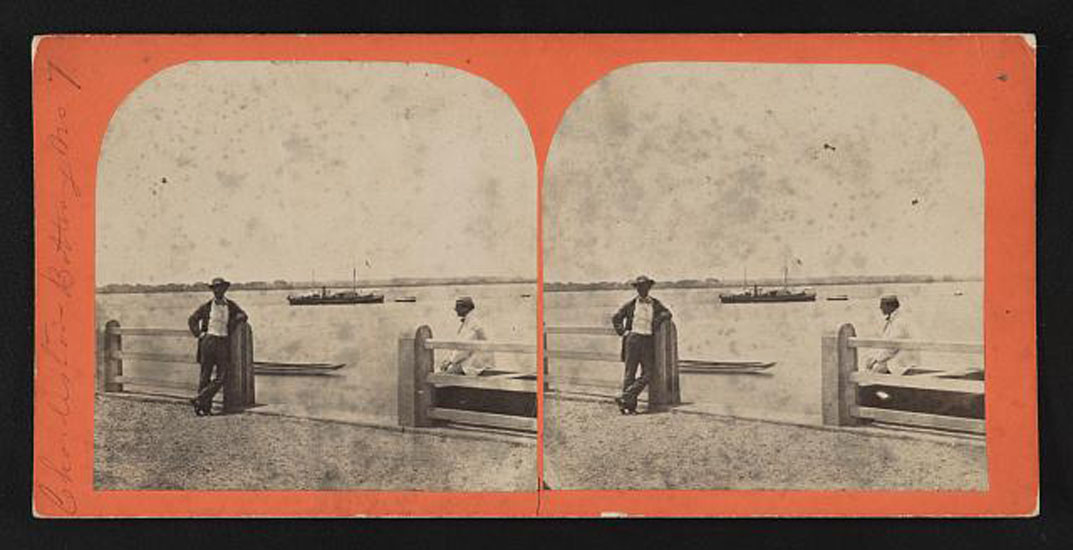 Photograph shows a view of Charleston harbor from the battery with a ship at anchor in the distance. One man leans against the fence post while another is seated on a bench.


"I’m delighted that the Library of Congress has agreed to acquire my collection," said Stanford. "I feel that the Library is the perfect home for the images, an ultra-safe and secure place where they will be fully accessible, not only now, but for future generations to come."

Helena Zinkham, chief of the Prints and Photographs Division at the Library of Congress, said "Mrs. Stanford offered the Library an exceptional opportunity to fill key gaps in our holdings by making available selections from her unparalleled collection of American Civil War stereographs."

The Library’s Prints and Photographs Division is a premiere research center for access to original Civil War pictures. But most of the documentary photographs were made by such master Northern photographers as Alexander Gardner and the Mathew Brady Studio.

"We have critical gaps in our Southern stereographs and in images by local photographers in both North and South. The Stanford Collection can provide scenes with slaves in 1860 South Carolina, views in Louisiana and Texas, rare coverage of naval and land battles, small Pennsylvania battlefront towns and much more," said Zinkham. "The Library has long sought to expand its coverage of the war. At the start of the Civil War 150th anniversary years, the Liljenquist Collection brought remarkable portraiture of enlisted men, both Confederate and Union. As the anniversary years conclude, the Stanford Collection adds rare views of the South made by the people who lived there. Together, these collections can fuel new research for years to come."

The 77 images now online include 12 from Lincoln’s funeral procession through cities, including Baltimore, Philadelphia, New York City and Springfield, Illinois. The images show the president’s casket in elaborate open-air hearses that passed through the main streets of the cities; buildings draped in mourning bunting; and crowds lined up to see the procession.

The other 65 images are stereograph photos taken by James M. Osborn and Frederick E. Durbec, who operated a photography business, "Osborn & Durbec’s Southern Stereoscopic & Photographic Depot" on King Street in Charleston, South Carolina, from about 1859 to1863. The stereo photos show scenes from South Carolina in 1860-61, including slaves living and working at Rockville Plantation; Fort Sumter after bombardment; Fort Moultrie; and the Charleston Battery.

The Library of Congress Prints and Photographs Division holds more than 15 million photographs, drawings and prints from the 15th century to the present day. International in scope, these visual collections represent a uniquely rich array of human experience, knowledge, creativity and achievement, touching on almost every realm of endeavor: science, art, invention, government and political struggle, and the recording of history.