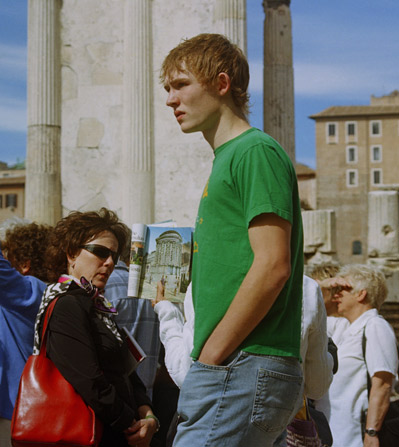 Production: Zoneattive The tourists one meets in Rome belong to a global, homologated and noisy world; a world in which the "Homeric" journey, understood as spiritual research, tending to an individual's growth and the overcoming of human knowledge, is replaced by fixed itineraries, cleverly packaged for unaware actors in the industrial mechanisms of tourism. Dressed in designer clothes, carrying the most sophisticated technological equipment, noisy and colourful, these modern consumer-explorers wearing high heals and modern sneakers, walk through austere ruins and the eternal values of classicality. The Colosseum, the Trevi Fountain, Saint Peter's, the Roman Forum are among the compulsory stops on their itineraries, and it is equally compulsory to take photographs bearings witness to this consumption, stating "I was there". However in this same world, surprisingly, at times the traveller resists the consumer and, to a patient observer, reveals all of a sudden a well-defined personality, attentive and curious eyes, the will to face up to what is different. And so sometimes the conflicts between ancient and modern, the eternal and the fleeting, silence and noise, remerge harmoniously. Tempio di Adriano Piazza di Pietra 06 4927141 OPEN: 6.00 pm - 12.00 pm Free entrance COME ARRIVARE: Matro A Spagna; bus 62, 80, 81, 85, 95, 116, 117, 119, 160, 175, 492, 628, 850