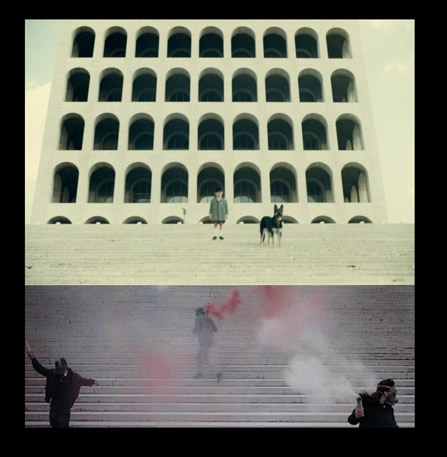 Production: The Gallery Apart - Roma Collaboration: Biblioteche di Roma - Archivio "Album di Roma" here are places that once received the status of images, draw from these an imaginative and expressive force beyond all expectations. Rome's EUR district is certainly one of these places. An emblematic location with its modernity consisting in empty spaces and metaphysical geometries, in which solitude and anguish intermingle with an extreme and desperate faith in the future. Among these spaces, and drawing on these feelings, many extraordinary cinematographic visions have taken shape in the work of the most important Italian directors, among them let us at least mention Antonioni, Fellini and Petri. But it was in these same locations in which L'Eclissi, La decima vittima, Otto e mezzo or La dolce vita were filmed, that people experienced a totally normal daily life also certainly without those poetic tensions. These are the premises for Visions of EUR, a work of art that Gea Casolaro created by patiently researching frames of films and family photographs taken during the Sixties and the Seventies portraying these same places. This then resulted in pairs of images that Casolaro recreated as units and that portray this dual perception, the real and the imaginary that characterises EUR, but above all images that tell its story. Casa del Cinema Villa Borghese - Largo Marcello Mastroianni 1 (accesso da Piazzale Brasile) 06 423601 www.casadelcinema.it OPEN: monday - friday 3.00 pm - 7.00 pm saturday - sunday 10.00 am - 2.00 pm / 3.00 pm - 7.00 pm Free entrance COME ARRIVARE: 490 - 491 - 495 - C3 - 88 - 95 - 116 - M Metro A (Spagna, Barberini, Villa Borghese, Flaminio)