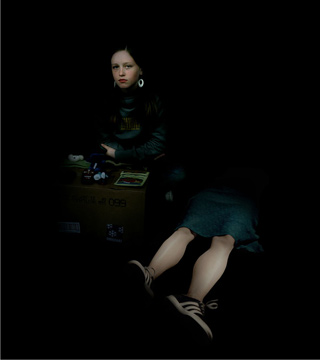 "My work is often about the world we have inside us confronted with the life we are forced to accept and live with. I like to find small moments where you can find bigger questions. I look for the vibration between the spoken and unspoken." (Julia Peirone) Gallery f5,6 is proud to announce the first solo exhibition in Germany of Julia Peirone (born 1973 in Argentina, grew up in Sweden). Julia Peirone is one of Sweden's shooting stars working in photography and video installation. Her work is a cross- fertilisation of straight documentary photography and arranged photography. By using the computer, Julia Peirone cuts, draws, adds, takes away, backwards and forwards and little by little constructs, destroys, and reconstructs the photographic sense of reality. Important in this process is not the result of the often slick digital world we have come to know. Instead her work orientates itself within the collagetechnique of the 1930's such as Hannah Höchs and other Dada artists. Gallery f5,6 will show a range of Julia Peirone's work from her earliest series "The Girl" where she combined found, old postcards with a drawing of a girl and Television images from the last World Cup of Argentina vs England in combination with this drawing. Integral in this series is the visibiltity of the imperfection of reproduction - the grid, when the reproduction is blown up too much, such as we are familiar with in Warhol's screen prints. This stands in direct relation to todays digital images where we, instead, are familiar with the digital pixels too small resolutions. In her more recent work, the use of the computer becomes an important tool. In her series Reconstrucion of Presence" characters photographed on the street in Europe are taken out of their "natural context", placed against a monochromatic background, being brought into very different and often unexpected company and also going against the central perspective we have known since the Renaissance and taken over by photography. In her newest series "Night Spots", brightly lit figures are surrounded by nocturnal darkness. Often she portays girls who are not directly facing the camera but are turning away into an almost invisible space, making these images so haunting. Julia Peirone's work leaves the realm of photography where it deals only with the outer layer of representing the world as it is. Instead her work creates an alternate, very personal inner reality where new constellations search for another meaning , where small gestures or movements of people become important keys to understanding one tiny aspect of the human condition. As David Hockney stipulates it is exactly in this aspect where in his mind painting supercedes photography, to return to this old game. In Julia Peirone's work, however, through working by combination, addition and destruction with different media and within one picture plane, she is able to search for these multiple and highly complex layers of reality, emotion and so forth and show the viewer ever new possibilities without beginning or end, within just one picture plane, in a sense like David Hockney does in his work. Julia Peirone grew up in Sweden as the daughter of Argentine immigrants. She will have her first major solo show in New York this year. She has shown in numerous museums in Scandinavia such as the Finnish Museum of photography, the Museum of Modern Art in Sweden, at Brandström and Steene Gallery in Stockholm, the Hereford photography festival, Arles Photography Festival. She has received numerous awards and grants in Sweden and was part of the northern Cities Project that toured all of Sandinavia and parts of Russia. Her work is represented in mainly Scandinavian Private Collections, the National Art Council Sweden, the Cultural Fund in Gothenburg and in numerous other Scandinavian Institutions. Julia Peirone graduated from Sweden's most prestigous art school Konstfack, Stockholm in 2001.