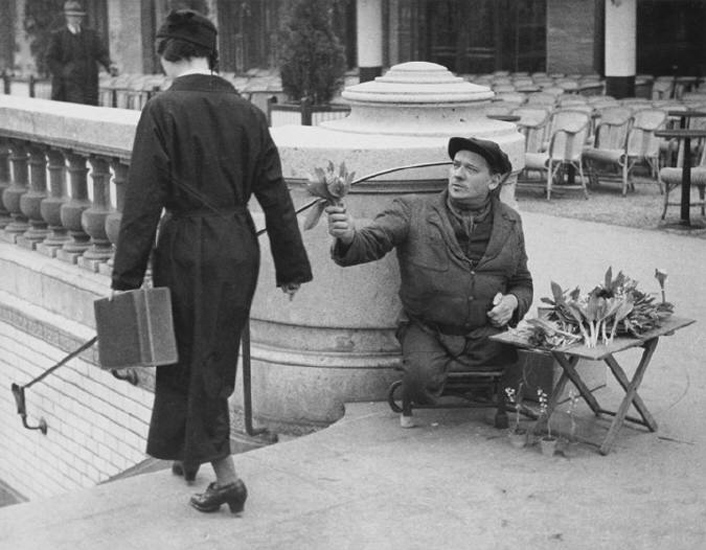 "The camera is my tool through which I try to give a reason to everything and to every happening around me. Everything is a subject. Every subject has a rhythm. To feel this rhythm is the 'raison d'être'. The photo is a fixed moment of such a 'raison d'être' which lives on in itself."

Stephen Daiter Gallery is pleased to present André Kertész: Raison d'Etre. This exhibition is comprised of scores of the actual photographs André Kertész originally displayed in the historic group exhibition, The Concerned Photographer at the Riverside Museum in New York City in 1967. Raison d' Etre ranges through many of the classic works from the artist's three great periods, centered on Budapest, Paris and New York. Kertész, who at the time had been making a professional comeback after a quarter-century of artistic isolation, used the opportunity to mount a retrospective of his career right up to the moment. (One of the artist's well-known pieces, "Empire State in a Puddle" was created just a couple of weeks before the show's opening.) And in the few years leading up to The Concerned Photographer project, Kertész had been feted in Europe with exhibitions in Venice and Paris and he was having books published. In 1964 the artist was represented by forty prints in a monograph exhibition at the Museum of Modern Art, curated by John Szarkowski.

So in 1967, at the Riverside Museum, Kertész was well prepared to arrange a comprehensive display in his allotted gallery. Kertész had some photographs made specifically for the exhibition, but he also brought prints from home, and hung several dozens of them salon style, with a variety of mats, mounts and frames. The photographs by Kertész became the hit of the show and people swarmed to the museum to meet him. There on the walls was an impressive array. There were some of his earliest works - reportage of soldiers resting away from the battlefields of World War I. Also from this first great period of photographing were classics such as" Circus, Budapest" 1920 and the "Blind Musician" 1921. Present was his first picture made in Paris in 1925, called appropriately, "The First Photograph I Took in Paris (Rue Vavin)" as well as "Le Café du Dome", which captured perfectly the Parisian cafe sensibility described by every writer from Hemingway to Janet Flanner. The playful "Satiric Dancer" and the exquisite "Chez Mondrian" – the spot-on evocation of the spirit of his friend, the artist Mondrian, in a photographic rendering of the foyer to his home. Kertész rounded things out with the pictures he had been taking in New York from the late 1930s on, brilliantly designed and thoughtful works that reflected well his sense of melancholy and isolation, a result of his subtle style having gone unappreciated for too long in America. "Utica" New York, and "The Pigeon" are elegant expressions of this alienation. "Broken Bench" brings the viewer in closer, and symbolized a great deal about the soul of Kertész.But the great photographer was still able to express his joie de vivre; the year before the Riverside Museum show he recorded one of his more delightful images, "Children's Zoo", New York 1966, a print which captures perfectly the joy and carefreeness that children often experience.Raison d "Etre does indeed present an historic and robust review of the works of an artist about whom John Szarkowski wrote in the 1964 MoMA catalogue :
"His work, perhaps more than that of any other photographer, defined the direction in which modern European photography developed."