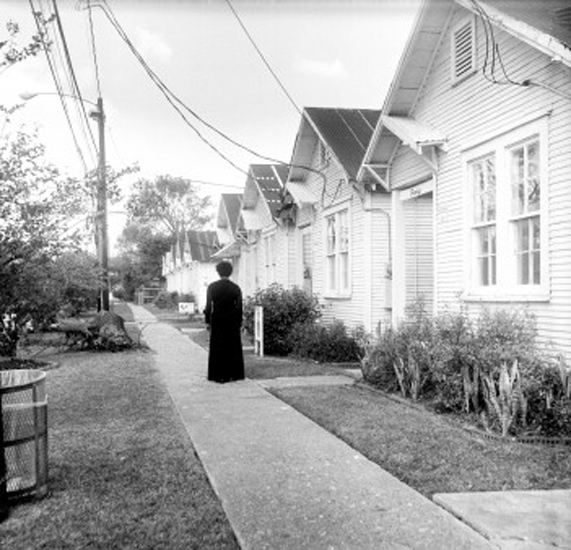 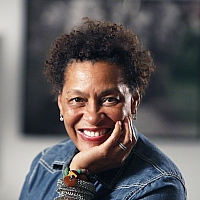 Carrie Mae Weems: The Museum Series presents an intimate look at an ongoing series that Weems began in 2006. The artist stands, with her back turned to the camera, in proximity to some of the world's leading museums and cultural institutions. The resulting images act as ruminations on the collecting and exhibiting practices of these sites.

Since 1978, Weems (b. 1953, Portland, Oregon) has examined the historical complexities of identity, class and social relations through photography and other media, such as video, installation, sound and text. Working in series, her generally black-and-white photographs articulate and reify the African-American experience in particular for broad contemplation. Varying from intimate to sweeping in scale, Weems's diverse oeuvre reflects the artist's commitment to revealing inequalities that potentially touch upon all segments of humanity.

The Museum Series (2006–present) shows Weems, shrouded in black, traveling to domestic locations, such as the Philadelphia Museum of Art and Project Row Houses in Houston, as well as outside of the United States to the Tate Modern, London; the Pergamon Museum in Berlin; and the Galleria Nazionale D'Arte Moderna in Rome. The images are complicated by her position as an artist in relationship to these institutions as well as by the constellation of race and gender inequality, agency and access that surround them. Implicated in each photograph by virtue of size and physical position, the viewer is asked to question the manner by which cultural institutions affirm or reject certain histories through their collecting and display decisions.

Carrie Mae Weems: The Museum Series is organized by Assistant Curator Lauren Haynes and runs concurrently with Weems’s mid-career retrospective, Carrie Mae Weems: Three Decades of Photography and Video, on view at the Guggenheim Museum from January 24 – May 14, 2014. Three Decades was organized by the Frist Center for Visual Arts in Nashville and has traveled to the Portland Art Museum, The Cleveland Museum of Art and the Cantor Arts Center at Stanford University.
- See more at: http://www.studiomuseum.org/exhibition/carrie-mae-weems-the-museum-series#sthash.uyLMpuTU.dpuf