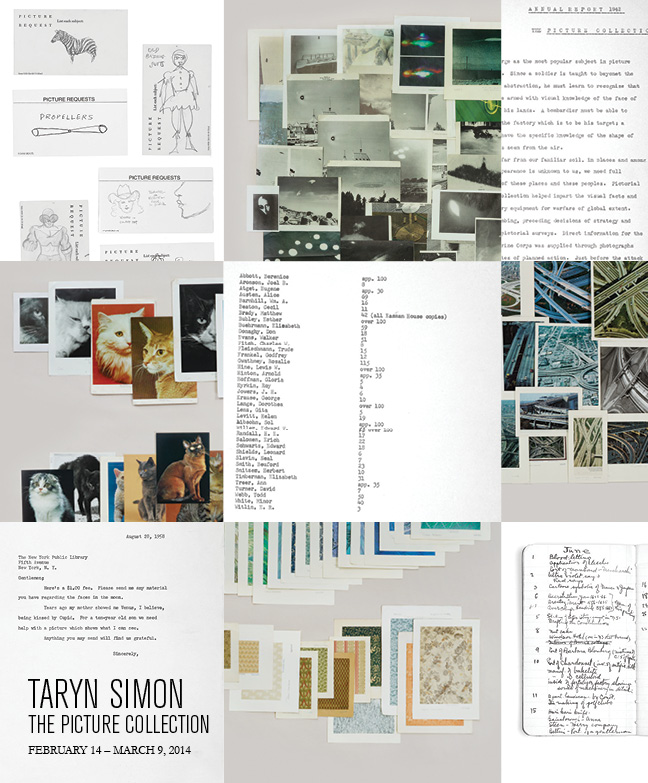 American artist Taryn Simon returns to Baldwin Gallery for her second show. The ‘pictures’ in Simon’s Picture Collection photo series were mined from the New York Public Library image archive: a precursor of the internet search engine used by New York artists for generations. Each re-photographed work retains as title the category designation of the photographs within. The installation of ‘The Pictures Collection’ lays out facsimile folders of source material like hyper-links: centered in text-box vitrines, and the image search results open out on the gallery walls around. Simon considers her mixed media works to be largely documentations of the performance of their creation: the scheme with which she selects subjects, the form and color compositions of the found, and the relationships invited by her created arrangements. Most central, of course, is the highlighting of the selections themselves; Simon’s work questions the choices made on behalf of the end viewer, and in doing so underscores the unstated imprimatur of received visual meanings. Ultimately, in ‘The Picture Collection’ Simon uses the elucidation of her own Art making practices to question the barrage of visual presentations around us, and in her very deliberate reframing, invites us to examine all of the images that we see, and to consider both the hand and the process of the unseen curator around us.