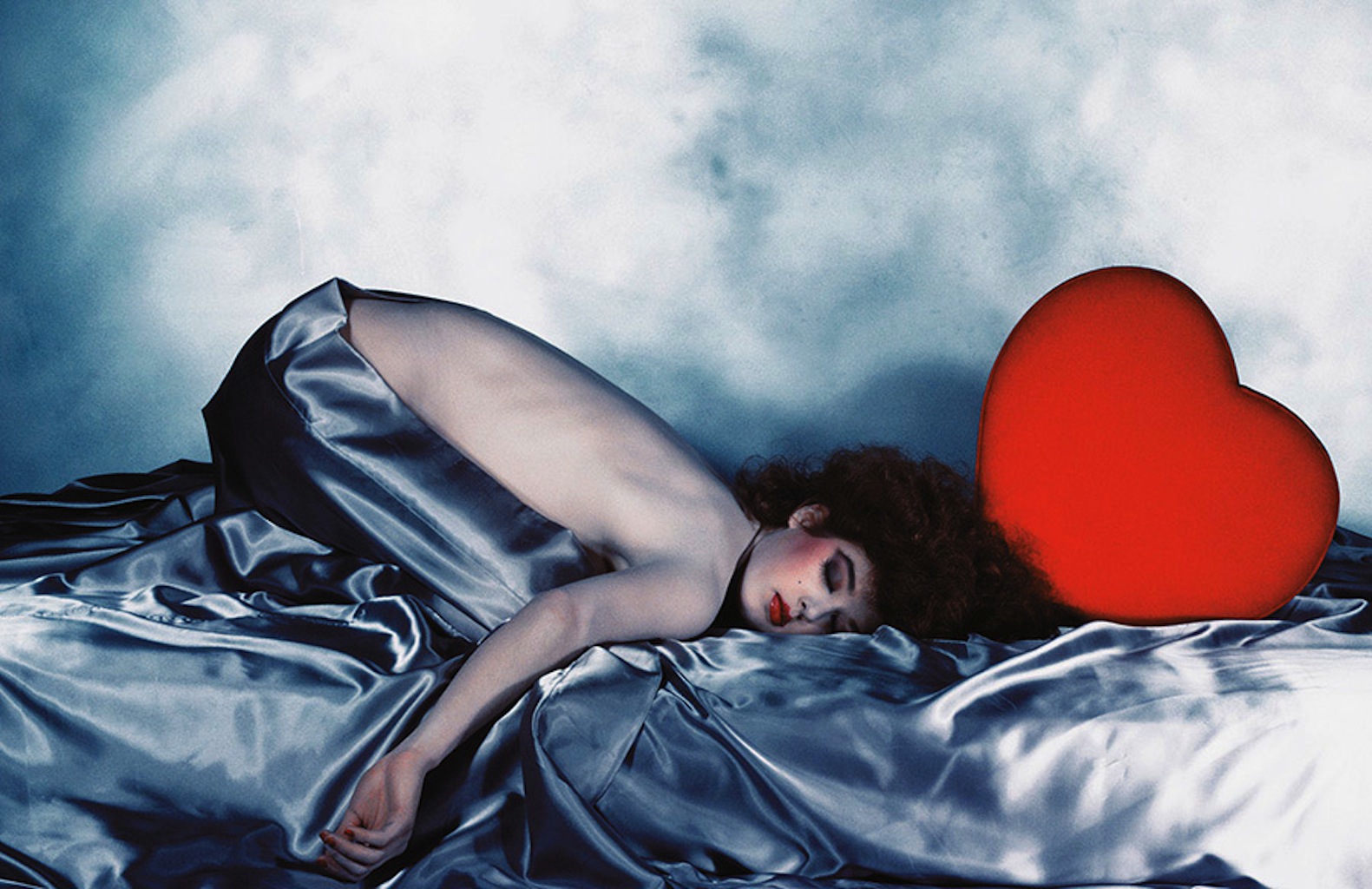 House of Photography at Deichtorhallen Hamburg is pleased to announce an exhibition of the legendary photographer Guy Bourdin (1928–1991), to be on view from November 1, 2013 to January 26, 2014. This most comprehensive exhibition to date is both an overview of the essential components of Guy Bourdin’s oeuvre and an introduction to unveiling works from his personal archives which have never been seen before.

This is the first time that both his works as a painter and his notes on films will been shown at an exhibition. B&W shots dating from the 1950s are also included, showing portraits of artists and views of the city of Paris as well as Polaroids, sketches and texts. The exhibition examines Guy Bourdin’s oeuvre, but moreover, it provides insight into the complex working processes of the photographer’s mind and aims to establish his status as a visionaire image maker.
Guy Bourdin’s career spanned more than forty years during which time he worked for the world’s leading fashion houses and magazines. With the eye of a painter, Guy Bourdin created images that contained fascinating stories, compositions, both in B&W and in colors. He was among the 1st to create images with narratives, telling stories and shows that the image is more important than the product which is displayed. Using fashion photography as his medium, he sent out his message, one that was difficult to decode, exploring the realms between the absurd and the sublime. Famed for his suggestive narratives and surreal aesthetics, he radically broke conventions of commercial photography with a relentless perfectionism and sharp humor.
During the 1950s, Guy Bourdin launched his career with fashion assignments for Vogue Paris working in B&W. It’s nearly unknown, that half of the oeuvre of Guy Bourdin is black-and-white and as amazingly powerful as his colour works. He developed color photography to its maximum effect, creating dramatic accents with intense color saturation and textures in his compositions.

Guy Bourdin used the format of the double spread magazine page in the most inventive way. He tailored his compositions to the constraints of the printed page both conceptually and graphically, and the mirror motif so central in his work finds its formal counterpart in the doubleness of the magazine spread. Layout and design become powerful metaphors for the photographic medium, engaging the eye and with it, the mind. While on the one hand employing formal elements of composition, Guy Bourdin, on the other hand, sought to transcend the reality of the photographic medium with surreal twists to the apparent subject of his images and his unconventional manipulation of the picture plane. Given total creative freedom and with uncompromising artistic ethic, Guy Bourdin captured the imagination of a whole generation at the late 1970s, recognised as the highest note in his career.
Guy Bourdin was an image maker, a perfectionist. He knew how to grab the attention of the viewer and left nothing to chance. He created impeccable sets, or when not shooting in his studio rue des Ecouffes in le Marais, in undistinguished bedrooms, on the beach, in nature, or in urban landscapes. The unusual dramas that unfold in these seemingly everyday scenes and ordinary encounters pique our subconscious and invite our imagination. Moreover, he developed a technic using hyper real colours, meticulous compositions of cropped elements such as low skies with high grounds and the interplay of light and shadows as well as the unique make-up of the models.
»Guy Bourdin irreverently swept away all the standards of beauty, conventional morals and product portrayals in one fell swoop. Around the female body he constructed visual disruptions, the outrageous, the hair-raising, the indiscreet, the ugly, the doomed, the fragmentary and the absent, torsos and death – all the tension and the entire gamut of what lies beyond the aesthetic and the moral,« explains the exhibition’s curator Ingo Taubhorn. Bourdin investigates in minute detail the variables of fashion photography, from brash posing to subtle performances and from complex settings to novel and disturbing notions of images.
Guy Bourdin’s imagery not only changed the course of fashion photography but influenced a host of contemporary artists, photographers and filmmakers. It is without question, that Guy Bourdin’s work for Vogue and his highly acclaimed print advertising for Charles Jourdan in the 1970s are now being seen in the appropriate context of contemporary art.

Guy Bourdin (1928-1991) was born in Paris. A painter his entire life and a self-taught photographer, he was working for magazines, such as Vogue as well as for brands such as Chanel, Ungaro and Charles Jourdan. He exhibited his first photographs at Galerie 29 in 1952. Nowadays his work has exhibited in the most prestigious museums, such as The Victoria & Albert Museum, The Jeu de Paume, The National Art Museum of China, The Tokyo Metropolitan Museum of Photography and The Moscow House of Photography . His oeuvres is part of the collection of many prestigious institutions such as the MoMA in New York, The Getty Museum in Los Angeles, SFMOMA in San Francisco and the collection of the V&A among others.
»It's reasonably easy to get people to stop and look« Nick Knight insists »but it’s difficult to get them to think. That's what Guy Bourdin's images did and still do.«