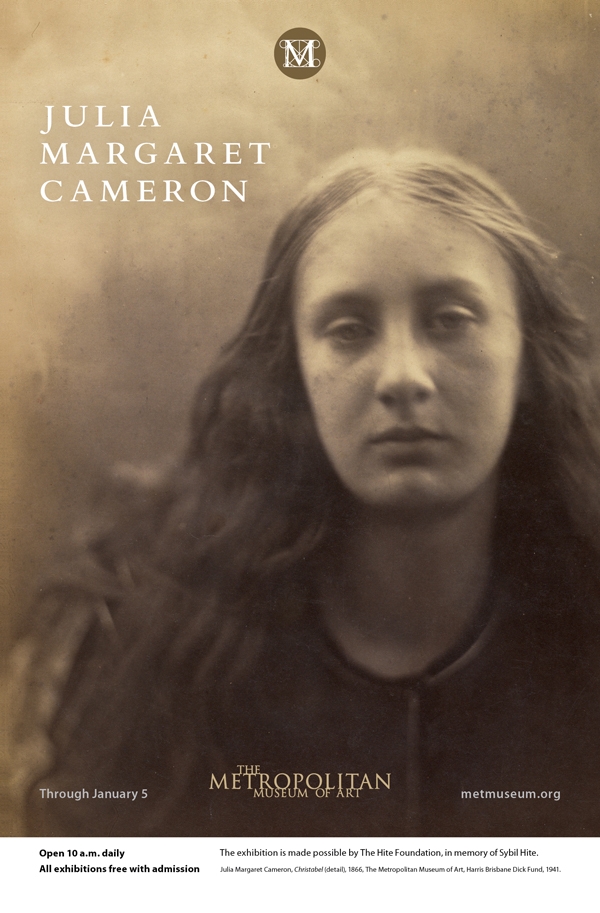 One of the greatest portraitists in the history of photography, Julia Margaret Cameron (1815–1879) blended an unorthodox technique, a deeply spiritual sensibility, and a Pre- Raphaelite–inflected aesthetic to create a gallery of vivid portraits and a mirror of the Victorian soul. This will be the first New York City museum exhibition devoted to Cameron's work in nearly a generation, and the first ever at the Met. The showing of thirty-five works is drawn entirely from the Metropolitan's rich collection, including major works from the Rubel Collection acquired in 1997 and the Gilman Collection acquired in 2005.

When she received her first camera in December 1863 as a gift from her daughter and son-in-law, Cameron was forty-eight, a mother of six, and a deeply religious, well-read, somewhat eccentric friend of many notable Victorian artists, poets, and thinkers. "From the first moment I handled my lens with a tender ardour," she wrote, "and it has become to me as a living thing, with voice and memory and creative vigour." Condemned by some contemporaries for sloppy craftsmanship, she purposely avoided the perfect resolution and minute detail that glass negatives permitted, opting instead for carefully directed light, soft focus, and long exposures that allowed the sitters' slight movement to register in her pictures, instilling them with an uncommon sense of breath and life.

The exhibition will feature masterpieces from each of Cameron's three major bodies of work: portraits of men "great thro' genius," including painter G. F. Watts, poet Alfred, Lord Tennyson, scientist Sir John Herschel, and philosopher and historian Thomas Carlyle; women "great thro' love," including relatives, neighbors, and household staff, often titled as literary, historical, or biblical subjects; and staged groupings such as her illustrations for Tennyson's Idylls of the King or her Annunciation in the style of Perugino.