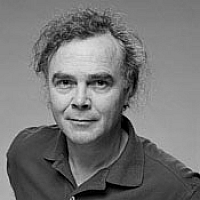 The work of German born Max Regenberg (1951) can be seen as a solitary position within photography. For the last 25 years he has worked on a single theme: how does billboard advertising function within public space in Europe. This is a particularly interesting project as we are closing the analogue age and moving into a digital, fast moving way of life. The ground for Max Regenberg’s fascinating project was laid when he was living and working in North America, where over dimensional billboards very much became part of everyday life on the street since the 70’s, paving the way for the victory of image over word culture. Regensberg’s work is formally and thematically embedded within „new topographics“ and „new color photography“ of the 1960’s and 1970’s. Artists such as Lewis Baltz, Bernd and Hilla Becher, Stephen Shore, William Eggleston and Joel Meyerowitz etc. and their interest for what one could call culture over nature, taking place in the Western world, is at the core of Max Regenberg’s and their work. At the same time as Joel Meyerowowitz and Stephen Shore, Max Regenberg began working on his long-term study at the end of the 70’s. In the German tradition of collective documentation and typological photography of artists like August Sander and later Bernd and Hilla Becher, Max Regenberg influenced by an American eye directs this at European cities, in particular Germany and the industrial cities of Cologne and Düsseldorf, where he grew up and lives and works today. Max Regenberg’s direct and focused pictorial language enhances the contrasts between the high gloss consumer world with that of what is really found in the city or in suburbs. In his highly detailed city studies the street itself becomes the street image and the billboard within this becomes a self-reflexive image within an image, promising a seemingly perfect world in relation to the street. Regenberg’s view of the world thus is as highly complex as our reality but by focusing and extrapolating a particular dialogues, the viewer can enter with ease and also humour and experience a very different and unique way of seeing that changes ones own view and allows us to reflect upon this world, with the different eye of Max Regenberg. Since his first solo exhibition at the Rheinisches Landesmuseum in Bonn in 2000, museums and private collections have become very interested in Regenberg’s long-term study not only for art historical but also for its sociological implications. In 2001 he received the Peter Keetman prize as well as the Toyota art prize in 2002.