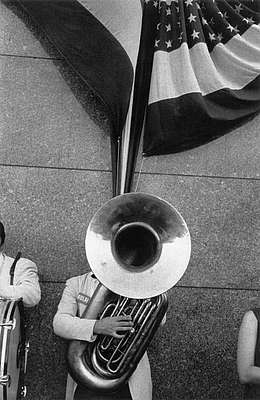 Armed with a camera and a fresh cache of film and bankrolled by a Guggenheim Foundation grant, Robert Frank crisscrossed the United States during 1955 and 1956. The photographs he brought back form a portrait of the country at the time and hint at its future. He saw the hope of the future in the faces of a couple at city hall in Reno, Nevada, and the despair of the present in a grimy roofscape. He saw the roiling racial tension, glamour, and beauty, and, perhaps because Frank himself was on the road, he was particularly attuned to Americans' love for cars. Funeral-goers lean against a shiny sedan, lovers kiss on a beach blanket in front of their parked car, young boys perch in the back seat at a drive-in movie. A sports car under a drop cloth is framed by two California palm trees; on the next page, a blanket is draped over a car accident victim's body in Arizona. Robert Frank's Americans reappear 40 years after they were initially published in this exquisite volume by Scalo. Each photograph (there are more than 80 of them) stands alone on a page, while the caption information is included at the back of the book, allowing viewers an unfettered look at the images. Jack Kerouac's original introduction, commissioned when the photographer showed the writer his work while sitting on a sidewalk one night outside of a party, provides the only accompanying text. Kerouac's words add narrative dimension to Frank's imagery while in turn the photographs themselves perfectly illustrate the writer's own work. Ce texte se rapporte à une édition épuisée ou indisponible de ce titre. New York Times, By Vicki Goldberg Mr.Frank's landmark book, "The Americans" was one of a handful of major innovations in 20th century photography. Ce texte se rapporte à une édition épuisée ou indisponible de ce titre. Ingram Previously published in 1959, Frank's most famous and influential photography book contained a series of deceptively simple photos that he took on a trip through America in 1955 and 1956. These pictures of everyday people still speak to us today, 40 years and several generations later. Ce texte se rapporte à une édition épuisée ou indisponible de ce titre.