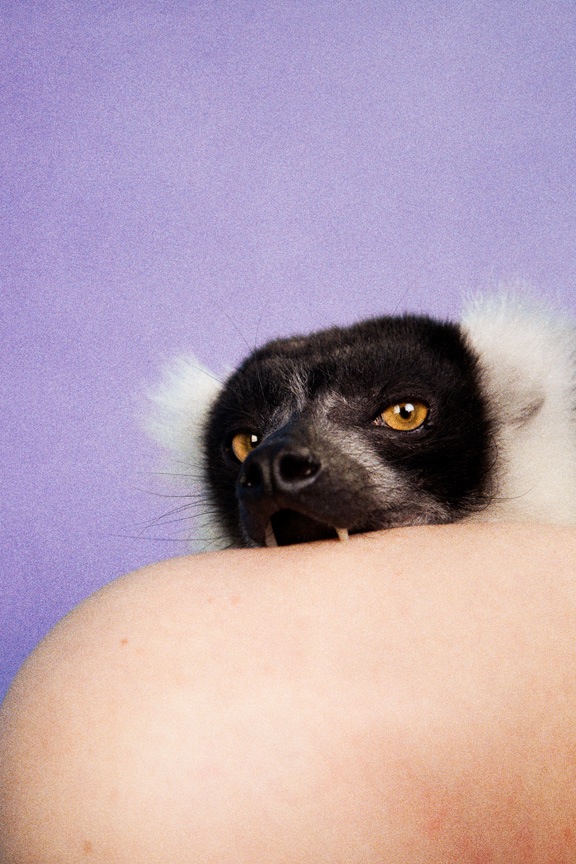 Team is pleased to present an exhibition of new work by New York-based artist Ryan McGinley. Entitled Animals, the show will run from May 2nd through June 2nd, 2012. This marks the first time a single artist has had simultaneous shows in our two spaces.

Animals consists of McGinley's color studio portraits of live animals with nude models. The exhibition is his first made up exclusively of selections from this growing, and ambitious, body of work. The artist visited various sanctuaries, zoos, and rescue establishments across the United States, erecting a mobile studio wherever possible and working with a number of pre-eminent animal trainers. The animals are not mere props in photographs of people; on the contrary, McGinley considers them the subjects of these images. There exists both tension and tenderness between the models and wild animals, as they claw, clutch, nibble, and hug one another.

This body of work has two starkly contrasting sides, epitomized by two of the photographs on view. In the comical Dakota (Marmoset), a tiny monkey hangs from a male model's pubic hair, partly obscuring his genitals. The human legs and torso are covered in scratches and the marmoset stares directly at the camera, wearing an expression of apparent shock. In Parakeets, a flock of lushly colored birds tears across a blue background while a girl, face obscured by a blurred green and white wing, stretches out her arms in an imitation of flight. The barroom roughhouse of the former and dulcet elegance of the latter act as the exhibition's counterweights. Where the first piece is grotesque and lascivious, as humorous as it is horrifying, the other - a gushing moment of poetic beauty - strikes a profound emotional and visual harmony.

These photographs are studies in animal bodies, their strangeness and seductivity. As a collection, they highlight the similarities and differences between the various species' anatomies, the familiarity and relative regularity of the human form providing a blank slate against which to read the animals. The Pop art attitude generated through the use of candy-colored backgrounds serves to make the images all the more attractive, introducing an internal tension between their initially inviting appearances and the sometimes off-putting subject matter. These colors, in tandem with the improbable relationships between the animals and people, situate the photographs firmly within the province of the surreal and psychedelic.

Wild animals add a strong element of unpredictability to the traditionally more controlled context of studio photography. McGinley often gives light direction to his models, but animals do not heed such instruction. Though he devises each situation, choosing and pairing animals and models with variously colored backdrops, perhaps suggesting an initial position, the images are never pre-mediated: he allows the interactions to unfold naturally, photographing the outcome. McGinley's approach to his work blurs the lines separating private and public, nature and studio, staged and documentary.  In much the same spirit with which he has imposed the studio upon the wild - employing cinematic lighting in his recent outdoor photography - he has introduced the wild into a type of studio setting.

McGinley's photographs are included in the collections of The Solomon R. Guggenheim Museum, the San Francisco Museum of Modern Art, the Museum of Fine Arts in Houston, the Smithsonian National Portrait Gallery in Washington D.C., and many others. The 34 year-old artist has had solo exhibitions at the Whitney Museum of Art and at MoMA PS1 in New York, at the MUSAC in Spain, and at the Kunsthalle Vienna. Last year McGinley had solo shows in London and Amsterdam. Earlier this year a monograph on his work was released by Twin Palms Press. May 2012 will also see the release of a long-awaited book surveying his career from 1999 through the present. Published by Rizzoli, the book contains essays by Chris Kraus and John Kelsey, as well as an interview with Gus Van Sant. 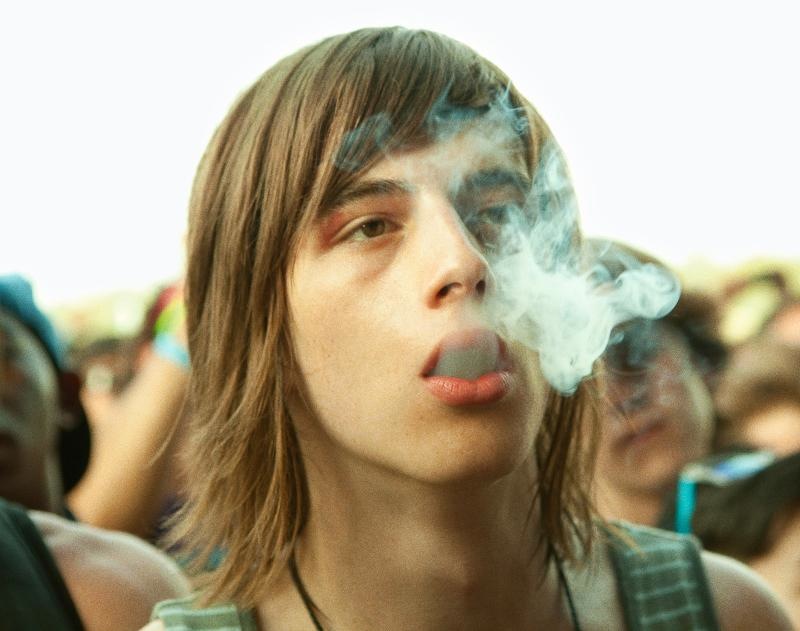 Grids consists of three huge grids of individual portraits of fans at concerts. Over the past four years, Ryan McGinley has photographed faces in the crowd at a number of large outdoor music festivals across the United States and in Europe. These recurring events run for two or three days and feature a relatively wide variety of artists. McGinley and the members of his crew - each of whom has been given explicit instruction - spend their days from noon until well past midnight attending performances, shooting the fans from myriad vantage points, afterwards camping overnight on the fairgrounds. In this way, they become deeply involved observers, both physically and emotionally immersed in the throng while still maintaining a certain sense of removal. The resulting images show ecstatic faces awash with colored light, each larger than life size.

Many of the pictures are dominated by a single color, a result not of post-production editing but rather the stages' differently colored lights. The vivid tones further the individual images' strong emotional tenors, earnest and heart-felt, but never melodramatic. The calculated arrangement of the photographs allows the colors to interact with each other, leading the viewer's eye up, down, and across the grids which sometimes stretch across as much as twenty five feet of space. It might be possible to view and appreciate these works as color studies, were it not for the emphatic vivacity of their subjects. When these photos are produced and arranged as such, the effect is of a youthful sublime.

Grids displays McGinley's own significant relationship to rock, specifically the experience of live music. His subjects are visibly entranced by the performances of their favorite bands, looking beyond the camera toward the stage, oftentimes altogether unaware of the artist. In most of the pictures, the face occupies the bulk of the photo's frame. Though similar in their intensity, their individual expressions convey a wide variety of emotions, ranging from blissful to darkly contemplative. McGinley's own fandom is apparent: he has no doubt found himself in such states of rapture. Since early adolescence, he has been very actively involved in the rituals of popular culture, chief among them the community forming at the core of concert attendance. The grids, all titled You and My Friends, speak to this sense of momentary collective friendship, absorbing and enfolding the viewer into the artist's own constructed audience.

These works build upon McGinley's repetoire of concert photography, which began with Irregular Regulars, his first show at Team in 2007. For that exhibition, he followed the musician Morrissey as he toured the United States, the U.K., and Mexico. With the grids, he continues to experiment with the genre of rock photography. Adopting a rigorous working practice, one which allows for tremendous subtlety, McGinley turns the viewer's attention away from the performer altogether and directly and exclusively toward the fans. The artist cites, as inspiration for this shift, the depiction of concertgoers in the 1958 documentary Jazz on a Summer's Day.