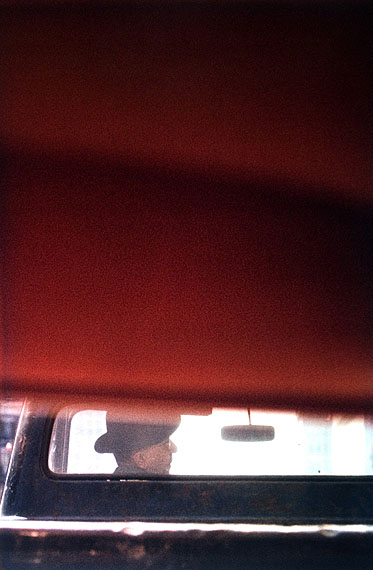 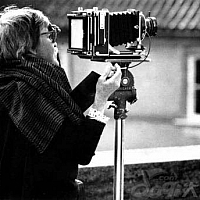 We are presenting, for the first time in this combination, works by renowned photographers Saul Leiter (*1923 Pittsburgh, Pennsylvania), Evelyn Hofer (*1922 Marburg a. d. Lahn - †2009 Mexico City) and Raghubir Singh (*1942 Jaipur, Indien - †1999 New York, USA). On display will be three early positions and perspectives of color photography – an american, european and indian view of the world united by the combined efforts for early color photography.

"What could be more natural, more ordinary than a color photograph? No one cared, of course, about the color picture in your wallet; it was the color photograph appearing on the wall of a gallery or art museum that caused the stir".
Kevin Moore in Starburst: Color Photography in America 1970 – 1980

Until the second half of the seventies exhibitions of color photography remained a rather rare occurence, it was the 1976 held exhibition Photographs by William Eggleston that brought change and public recognition for the colored prints. William Egglestons name, by now, is an almost everywhere accepted synonym for the genre of color photography . The question why it took color photography comparatively long to gain success can not be explained by technical developments, though. The explanation is rooted rather in the cultural expectations even the young medium of photography was confronted with. By the 1960s black and white photography, albeit art or documentary photography, already found its place in museums and galleries. The genre of documentary photography, by the way a whole different struggle concerning the topic of credibility in the art world, even began to enrich its modalities with subjectiveness while color photography still needed to look out for advocates.

The reasons for that seemed manifold, with black and white being considered much more respectfull due to ist medial abstractions whereas color photography appeared way too alluring and distant to the approaches of social documentation, being one of them. Too early happened the adoption of color photography by the advertising and entertainment industry to gain recognition among the public to become considered a serious art form. The photographers’ works collected in this exhibition defy these accusations and next to the photgraphs’ thematic subjects, the versatile usage of color – variant in style be it Leiter, Hofer or Singh, defeat any additional doubts.

Saul Leiter transferred the aspect of photographys’ decisive moment to paintings timelessness, by incorporating urban scenery in multiple reflexions and layers that recreate space as an abstract plot. He describes it best himself: „Photography is often treated as the high point of reality. But they are rather tiny fragments of souvenirs taken from the imperfect world“. His background and roots in the fine arts might have to be taken into consideration concerning this statement. Different to his contemporaries like William Klein, Robert Frank or Helen Levitt, who today are genuinely considered street photographers, Leiter remains interested in the painterly principles of abstractions. Color film materials merely have given him the opportunity to combine fine arts formalasthetic principles of abstract expressionism with photography.
The work of Evelyn Hofer is much more a photographical position by classical standards. Her photographies are sober studies, compositions are well thought of sceneries and her approach is always clear and simple. The results are intimate portraits of each subject as well as object. Color, to Evelyn Hofer, is no ingredient that coincidentally made it in the frame but is instead part of the intended setting she seeked out to portray. Color is equally important and crucial to every shot she considers successful and sometimes the shots’ main character. Hofer is known for her portraits as well as her landscapes or urban scenes – she sought out not only motion but also stillness in life. Her technical proficiency was highly respected among fellow photographers and for many young photographers a post as her assistant meant being part of that wisdom. This made Evelyn Hofer a household name in the world of professional photography and earned her the nickname of „the most famous unknown photographer in America“. We are especially proud of being able to present and offer dye transfer prints executed and signed by Evelyn Hofer herself.

Raghubir Singh on the other hand is not on search for his motives and compositions, but meets them per chance on his ways. It’s not incidental that in his motherland he is know as the „indian Cartier-Bresson“. Since the 1960’s he travelled to visit all of Indias provinces and collected his impressions in publications that had great success all over the world. Because of his special and attentive way of viewing his surroundings he transforms mere documentary in lyrical essays. Color for him is no medium, but pure life. Color and life are equally important.
"The true indian artist is not able to ignore the blessing of color. We experience color as epiphany,... . When the monsoon rains begin and brown desert dust is transformed in lush browns and green, then the color „lariya“ makes its arrival in peoples clothes. The green and yellow hues shine in unity with nature... .In the summertime soft colors make the heat disappear... white is the color that unifies life and death.“
Photography without using color would have been impossible for Raghubir Singh.