Adam Fuss - The Space Between Garden and Eve 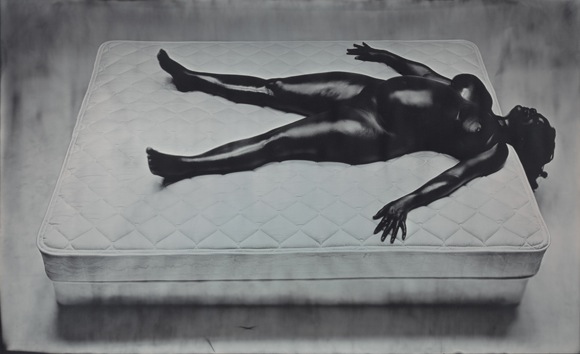 Xavier Hufkens has the pleasure to present a new exhibition by Adam Fuss. The Space Between Garden and Eve is the fifth solo exhibition by the artist at the gallery.

The British artist Adam Fuss lives in New York. For almost three decades he has brought photography back to its essence: the projection of a light source on a medium. He applies old techniques that were the origin of photography—such as photograms or daguerreotypes. He makes photographs without using a camera, as it were. His choice of subjects demonstrates poetic sensitivity. In a series of works from 2007, for example, he sensorially depicts the concentric circles formed by water drops. He creates shadow images between disappearance and appearance, which witness timeless beauty—like a modern alchemist.

In the exhibition The Space Between Garden and Eve, Fuss shows both a series of photograms and daguerreotypes. Photograms are the result of a labour intensive process of exposing an object on photosensitive paper. In this series Fuss—as often in his oeuvre—revisits a memory of his youth. The artist starts with the board game 'Snakes and Ladders' from his childhood to create a series of compositions where slithering snakes draw calligraphic patterns on a flat or geometrical background. In a number of works—with Caduceus as subtitle—the snakes undulate around a stave, as a reference to the Greek god Hermes' stave surrounded by two snakes. The symbol of the caduceus originates from the Tiresias myth. When he saw two copulating snakes on the ground and tried to separate them with his stave, he was transformed into a woman. Seven years later the action took place again and he was transformed into a man. The stave has been associated with magic powers ever since.

Besides the photograms, a series of new daguerreotypes by the artist are also on display. A daguerreotype is a photo depicted on a polished silver plate prepared with chemical vapor. The results are mirror images with a holographic effect that play with our perceptions. The daguerreotypes show a mattress, either empty or covered with slithering snakes or a naked person. The bed symbolises key moments in life such as birth, copulation and death. Again, the photos simultaneously seem to refer to the Tiresias myth.

The work of Adam Fuss has been exhibited all over the world in numerous leading art institutions including the Victoria & Albert Museum, London; the Metropolitan Museum of Art, New York; the Kunsthalle Bielefeld; Huis Marseille, Amsterdam; the Andy Warhol Museum, Pittsburgh; the Vienna Secession, Vienna; the New Museum of Contemporary Art, New York; the Whitney Museum, New York; the Smithsonian Institute, Washington.