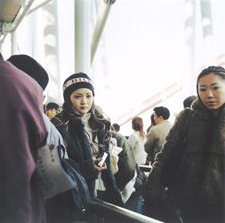 Amador Gallery proudly presents “Japan Today” an exhibition which brings together the work of three prominent contemporary Japanese photographers: Taiji Matsue, Osamu Kanemura and Mikiko Hara.
The exhibition presents each of their distinct approaches to capturing the unique character of Japan, its land and its people.

Osamu Kanemura embeds himself within the dense makeup of Tokyo, using the conventions of black and white street photography to novel ends by letting the layers of dense electrical and telecommunications wires to feature centrally within the series "My Name is Shockhammer". These stark images, whose tonal contrasts appear formally alluring and intricate, depict unfamiliar views of Japan that connect to one another through the dense network of wires that chaotically stream throughout them. The photos are thereby visually networked to one another in a manner analogous to the invisible electrical and communications networks that these wires create within the city itself.

Mikiko Hara’s work, from her book “Hysteric Thirteen” uses a snap-shot aesthetic to give her color images of urban life a casual appearance that contrasts with the ominous tensions legible in the faces and character of her subjects. Hara’s often bleached out, pastel pallet has a startlingly noirish allure. The figures, usually women, appear unknowable and distant; they are never fully accessible to the camera’s penetrating gaze. These ambiguous individuals create a startling sense of alienation that courses throughout the images and though never looking at the camera, the people seem aware that they are being watched, whether by Hara or by more sinister social forces.


Taiji Matsue’s JP-22 series refers to the 22nd prefecture of Japan, the Shizuoka region. Matsue uses the formal characteristics of color photography to great effect by framing sections of this visually diverse region from a greatly elevated viewpoint. The camera obliterates the horizon line ensconcing the viewer within an abstracted section of the landscape. The stunning details of these aerial vignettes are put in tension with the abstract patterns which emerge in them whereby the bustle of a dense urban neighborhood appears ordered within the grid structure of city streets and plots of farmland appear like assemblies of askew fractals and abstract quadrilaterals.