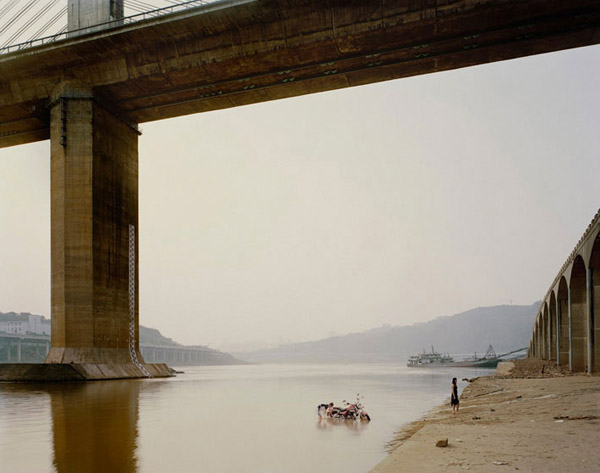 Nadav Kander’s Photo Series, awarded with the prestigious Prix Pictet in 2009, uniquely documents the rapid structural change along the Chinese Yangtze River. A current catalogue, published by HATJE CANTZ, with a foreword by former UN Secretary General Kofi Annan, accompanies the exhibition. Robert Polidori, on the other hand, belongs to the first photographers who in 2001 had access to the restricted zone of the Ukrainian industrial city of Pripyat and the nearby nuclear power station Chernobyl, with the nuclear accident having its 25th anniversary on April 26th, 2011. Polidori’s photographs impressively document the effects of the unquestionably biggest industrial disaster of the post-war period. Nadav Kander’s photographs, lacking sunlight and bathed in white haze and fog, reflect the epochal change of China. The Yangtze River, the lifeline of China and the third longest river in the world, has become a symbol of the constant and inexorable change of the nation. The photographer, born in Israel in 1962, has been revisiting the river over the course of three years, from 2005 to 2007, in order to document the life in over 186 cities and countless villages, all situated along the mouth of the river and all the way up to its spring in the Himalayas. Here, the photographer focuses on the drastic consequences of the economic boom on mankind. Gigantic bridges, underneath which people are having a leisurely picnic, colossal buildings of concrete accommodating thousands of people, or enormous hills of rubble and mud, where a woman is doing the dishes, are in stark contrast with the last traces of the original nature, which in most places has remained only barely visible. The result is a detailed picture of a country where tradition and modernity are in enormous conflict.