Half of the darkness - Pascal Grandmaison 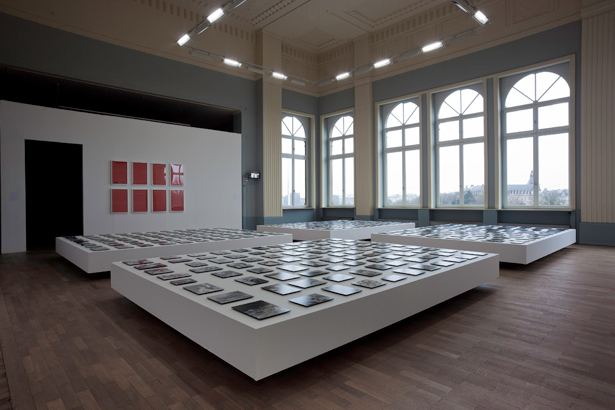 With Half of the darkness, Pascal Grandmaison (born in 1975; lives and works in Montreal, Canada) is enjoying his first solo exhibition in Europe, having mostly previously exhibited in Canada and the United States.

The title of the exhibition refers to the eponymous imposing artwork installed in the former ballroom of Casino Luxembourg and composed of 356 photos in black and white placed on four low plinths. Half of the darkness condenses the artistic discourse of Pascal Grandmaison in recent years and weaves links with other (series of) artworks through a subtle game of formal and conceptual analogies.

At first sight, a vision of the whole imposes itself through the chromatic unity of the artwork, which reflects the artist's predilection for tonalities based on variations of black and white. While the monochrome of the whole invites contemplation and meditation—notions that run through Grandmaison's artwork like a thread—it above all enables an initial formal reading of the artwork, and relates to the origins of photography, the artist's medium of predilection. The images come from books and documents from diverse archives, bearing witness to Grandmaison's interest in the history of photography, which he revisits through its technique and function.

The photographic documents in Half of the darkness all stage the Human Being in relation to the environment he pretends to dominate and control. They thus reveal the subjective reality and the fictional universe the photographic medium creates, rather than providing an objective representation of the world. The deliberate presentation of negative shots is a conceptual allusion to the technique and artifice of photography but also relates to its democratisation thanks to the process of the negative, giving place to a profusion of images—as highlighted in Half of the darkness.

The ambiguity of the title Half of the darkness relates to an aspect of the formal representation of subjects by luminous impression, revealed here, paradoxically, by their chromatic inversion and through the reversal of viewpoint. On the other hand, it refers to the latent polarity in Grandmaison's artwork as a whole, which manifests itself in the sweet tension of oppositional principles: light and dark, presence and absence, material and immaterial, force and fragility, reality and imaginary, distance and intimacy, gravity and weightlessness.

In general, the corpus of artworks—photographs, videos and sculptures—by Pascal Grandmaison is inscribed in a very particular formal universe, wholly united through an aesthetic harmony and a surprising visual coherence. The exhibition Half of the darkness presents a large number of new productions and, more particularly, of recent works in the field of sculpture. A monographic catalogue about Pascal Grandmaison, with texts by Adam Budak, Christopher Eamon, Marie Fraser, Béatrice Josse, Serge Murphy and Kevin Muhlen will be published during the exhibition.