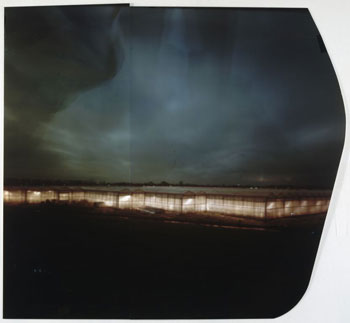 Under the theme "Electric Vision", the 7th edition of the BMW-Paris Photo Prize worth 12,000 euros, has been awarded to contemporary Hungarian artist Gábor ?sz who is represented by Loevenbruck Gallery in Paris.

Born in 1962 and based in Amsterdam, Gábor ?sz is an important figure on the contemporary Hungarian art scene. Uncluttered in style, his work deals mainly with the observation and relationship between man and the space around him. He uses the camera obscura and the stenope as processes by which he records the surrounding space and the effects of light on photosensitive paper.

Entitled "Permanent Daylight," (204) the winning work is part of a series he made in a caravan which he turned into a camera obscura and parked next to a cluster of agricultural greenhouses. The image was made over four successive nights during which the light emanating from these strange, almost unearthly structures slowly reacted with the photosensitive material.

Said Michel Frizot, photography historian and member of the 2010 jury: "The originality of Gábor ?sz's practice is unlike certain standards of today, owing to the fact that he works slowly and without pomposity. His image seems to us to be totally in tune with the theme "Electric vision."

Inspired by BMW's Concept ActiveE, the theme "Electric Vision" pays tribute to electricity as it shapes the technological future of our societies and transforms our vision of the world.

The jury also gave a special mention to Carlos Van de Roer, a photographer from New Zealand born in 1975 and represented by M+B Gallery (Los Angeles). In his work entitled "Miranda July, 2009" he tries to capture the aura of his model using an enhanced Polaroid camera.

The works of the 20 finalists, selected among 52 projects submitted by galleries participating in Paris Photo, are exhibited at the fair from 18th to 21st November 201.