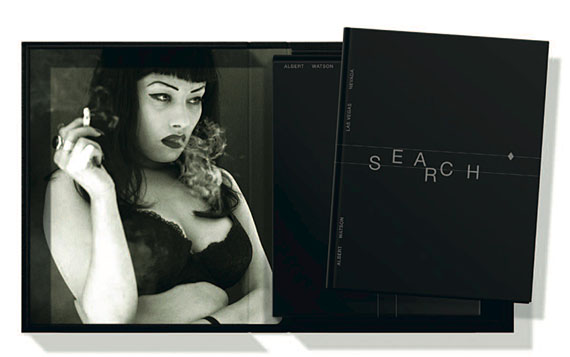 Watson is acclaimed for graphic sculptural images of people, places and objects and his has been a career of unpatallelled productivity, ranging from fashion to iconic portraits to reportage.

STRIP SEARCH, five years in the making, is Watson’s spectacular personal portrait of Las Vegas as seen through the lens of a legendary photographic artist. Over 270 remarkable landscapes, still lifes and portraits, together with dramatic reportage-style images, create a unique and visually stunning portrayal of one of the world’s most enigmatic cities. The two-volume set features 277 images, one landscape, and one portrait, and presented in a slipcase.

ALBERT WATSON ONE OF THE MOST UNFLUENTIAL PHOTOGRAPHERS OF ALL TIME, TO PUBLISH AN EPIC 40 YEAR RETROSPECTIVE.

UFO which stands for « unified fashion objectives » présents a 40 year rétrospective personally selected by Watson from his archive, and includes many images never before published and presented hère for the very first time. The large format book is a stunning design object featuring 295 images printed in seven coulours, and housed in a slick, black PET slipcase.

UFO is also available as a limited édition book ans an archival pigment print of 500 copies only, housed in an acrylic black glass slipcase. Individually numbered and personally signed by Albert Watson, the limited édition is available exclusively through galleries representing Albert Watson and selected retailers.

Albert Watson was born in Scotland in 1942 and moved to the USA 1970. Watson’s first celebrity photograph was of Alfred Hitchcock for the cover of Harper Bazaar in 1973. In 1976 he started shooting for Vogue and has amassed more than 200 Vogue covers and 40 Rolling Stone covers to his crédit. In addition to magazine work, Watson has created images for hundreds of advertising campaigns such Gap, Levi’s, Revlon and Chanel and has directied more than 500 tv commercials and shot dozens of posters for feature films in cluding « Kill Bill », « Memoirs of a Geisha » and « Da Vinci Code