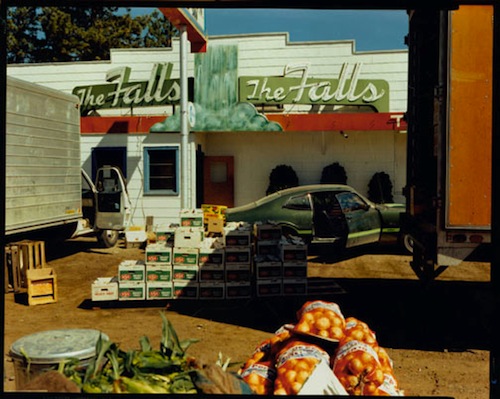 For its inaugural exhibition, Galerie Edwynn Houk Zur Stockeregg is pleased to present AMERICAN PIONEERS OF COLOR, a collection of modern and vintage prints by Stephen Shore, Joel Meyerowitz, and William Eggleston, widely acknowledged as the early masters of color photography in the United States. Their pioneering use of color in the 1970s was a bold departure from the long established tradition of black and white photography, which had dominated the medium from its inception, and laid the foundations for contemporary photography today.

Although the technology to produce color prints was widely available as early as the 1940s, for many years black and white remained the only accepted medium for fine art photography. Serious photographers held color in low esteem, seeing it as the language of the family snapshot, the tourist postcard or the consumer advertisement. Intrigued and inspired to develop a new vocabulary, Shore, Meyerowitz, and Eggleston began to actively explore the medium of color photography in the late 1960s and early 1970s.

Their approach to subject matter was shaped in part by their love of Robert Frank, Walker Evans, and Henri Cartier?Bresson – artists who wanted to capture the ordinary life of their immediate surroundings. But their sensitivity to color, and desire to shake free from the strong hold of nostalgia that working in black and white entailed, pointed them in new directions, and each photographer used color to explore not the exotic, but the familiar and record its presence in prosaic situations ? the American vernacular of gas stations, motels, suburban backyards, diners and small towns. Through their eyes, and the use of color, the banality of the subjects is transcended into compositions of stature and significance.

Meyerowitz and Eggleston experimented with the archivally sound yet more labor intensive of printing processes, the now extinct dye transfer print method. This process lends colors a rich, saturated quality. Both Shore and Meyerowitz adopted the use of the cumbersome 8x10 view camera, whose resultant prints revealed all the details and gradations to an astonishingly acute degree. Yet within these prints, there is an intriguing contradiction: whilst being modern in composition and subject matter, the prints are also lush and beautiful because of the photographers’ use of the antiquated 8x10 process.

The debate of the merits of color photography reached an apex with Eggleston’s controversial 1976 exhibition at the Museum of Modern Art, New York, their first in color. The show was initially panned by the critics and rejected by audiences, but ultimately color photography and Eggleston’s efforts were appreciated. AMERICAN PIONEERS OF COLOR explores the most important and now iconic works that Shore, Meyerowitz and Eggleston created during the 1970s. Works in the show include many original exhibition prints made at the time. By examining these artists, one can discern how color photography went from being dismissed as unimportant and garish, to becoming the driving force of the medium, accepted and embraced by the most talented and innovative photographers working today.