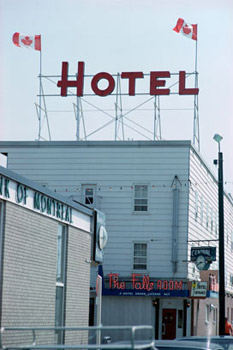 To celebrate its fortieth anniversary, the Canadian Cultural Centre invites an artist with an exceptional career, a trailblazer of new forms, a tireless inventor, an artist capable of changing even his name to adapt it to the spirit of his art. Iain Baxter, alias N.E. Thing Co., now alias IAIN BAXTER&, returns to the Canadian Cultural Centre for a new exhibition, Canadian Perspective, thirty years after his winter 1980–81 exhibition, which was inversely about Paris and mischievously entitled Reflets sur polaroid de grains de beauté parisiens (Reflected Paris Beauty Spots). The exhibition Canadian Perspective brings together about twenty-five works from Canadian and French collections, both public and private.

Active from the early 1960s, first in Vancouver, IAIN BAXTER& has continued to produce a prolific and varied oeuvre since then. His art has been marked by initiatives that have made him a leading figure in Canadian art.

According to his conviction that the artist can and must infiltrate all parts of society, that his work can take on forms and languages shared with social life, IAIN BAXTER& has produced—under different identities—signs and images, the works of a playful mind and an inventive way of looking at things, aware of the signs of the organization and activity of his contemporaries. Photography, installation, video, painting, event, object, action in the landscape, communication—the œuvre is eclectic. But it is often driven by ideas of time. Photography has a permanent role in it, as a daily gesture, a casual nomenclature of the world produced in the style of the journey.

As in conceptual art, words and language also play an important part in the work. Landscape as genre, a cornerstone of the art of the Canadian West, is central to the painted, filmed or photographed image, but IAIN BAXTER& has also often worked in the lived space—social or natural—touching on environmental issues, a longstanding concern of this former student of the natural sciences. The technologies of communication, starting with the telex and including the pioneering fax pieces, are also part of the vocabulary of this contemporary of Marshall McLuhan.

At the Canadian Cultural Centre, the œuvre is represented by both recent pieces and older works. Rooted in the landscaped spaces of Canada, marked by the richness of North American material culture, the works brought together are not, however, satisfied with the monumentality of the North American landscape but bring to it an offbeat point of view, a distance with regards to the things of the world and those of art, a hint of humour. The perspective is often reflexive—literally so in the Reflections series of the 1980s. These "Canadian perspectives" in the form of an itinerary remain open to the still very active oeuvre of IAIN BAXTER&, and are a mark of the continuing commitment of the Canadian Cultural Centre to the great figures of Canadian art.

One Canada Video (a major work from 1992 produced in collaboration with Louise Chance Baxter), a journey across Canada from the outermost bounds of Newfoundland to Vancouver Island, lasting about a hundred hours divided into 51 chapters, will be shown a chapter a day, according to an itinerary available on the premises and on the website of the Canadian Cultural Centre.

IAIN BAXTER& was born in England in 1936. He has lived in Canada since 1937, first in the West and currently in Windsor, Ontario.