Klein d'oeil at the Polka Gallery 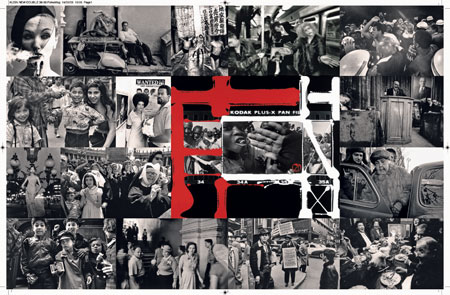 You can’t make William Klein do things. Anyone who’s tried has failed miserably, or has lied about having succeeded. He’s always the boss; he’s the one who decides what he’s going to shoot, edit, paint, assemble or compose.

That's why, convinced as we were that it would be pointless to suggest – and even more pointless to impose – a subject for this show, we decided to give him free rein.

There were a couple of “instructions”, though: first, he had to draw his inspiration from three of his photos chosen by us from the Aladdin's Cave of the Maison Européenne de la Photographie. These are three outstanding vintage prints that revolutionized fashion photography in the 1950s by setting models in real-life situations, in the middle of the crowd. In these three photos, Klein freed fashion from the mendacious constraints of the studio, switching off the artificial studio lights and switching on the lights of the city, bringing Haute Couture closer to the general public: the man and woman in the street.

These three photos form the starting point for William Klein's freely composed exhibition at Polka. The second instruction we gave him was that he should do exactly as he pleased. This he did quite methodically – to our great delight